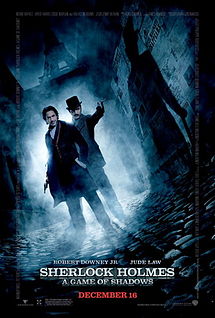 The character of Sherlock Holmes has seen his fair share of film adaptions of varying quality (including the awesome "Great Mouse Detective!"), but never had it looked like what Guy Ritchie came up with for the 2009 version of the classic detective. He was borderline insane, yet a genius and the strong writing and performances of the film drove it to be one of the most unique and awesome films of the year. It didn't take some sort of psychic to see that it was going to be a formidable franchise with the talent involved and it wasn't long for the second film to arise to satiate our appetites in "A Game Of Shadows." Although the film still packs an intense mixture of chemistry, humor, action, and thoughtfulness to its place in a larger spectrum, this sophomore effort from Ritchie and company is a little long for its own good and loses some focus on what needed to be accomplished in its run time.

Sherlock Holmes (Downey Jr) is quite literally in the middle of the biggest case of his crazy career. His innate ability to remember details and put the pieces of a larger puzzle together has made him more paranoid than usual and his latest obsession seems to be transfixing the massive conspiracy to that of a criminal mastermind like Professor Moriarty (Harris). It's fate that brings Watson (Law) back into town for his wedding and Holmes uses the opportunity to set his own plan into motion. The game of chess between two of the world's greatest minds has begun...and each intend to make it personal for the other.


The cast and crew of "Sherlock Holmes 2" make it really hard not to fall back in love with the entire concept. The chemistry is riveting. The films are funny, charming, high energy, and loaded with style. Ritchie really brings out his now quirky style for the character and the world that he occupies by littering the film with visual flair and plenty of detailing in the script. "A Game Of Shadows" can go a little far in this area as it bombards the viewer with almost too much style and its odd structuring (the former in the elongated slow motion run through the forest that sparks with unique style but runs thin quickly and the latter with some of the weird flashbacks with the train disguise as an example), but the end result is a massively entertaining film experience. Ritchie may not have found a tighter balance to his style, but its hard to deny that this sequel doesn't try its damnedest to be bigger and badder.

Believe it or not, as the Ritchie fan boy I am, his direction is not the best part about "A Game Of Shadows." Like the first film, the highlight is the chemistry of how it all works together. The film spitters and spatters at moments as it tries to almost outsmart itself with red herrings and tangents, but none of that matters when the actors are doing their things onscreen. Downey Jr and Law could ably make a two hour movie of bickering  and it would have been just as entertaining as the film was. Not to mention the addition of the seething yet almost relatable Harris as Moriarty into the mix and the humorous Fry as Holmes' brother...it makes for a fun watch. My one complaint about the characters and casting is that once again, the female lead gets overlooked and underused. A great actress like Rapace and that's all you give her? Really?

Although my love for "A Game Of Shadows" wasn't as immense as my love for the first film, this still ranks as a personal favorite of mine and one that I will watch time and time against despite some of its gaping flaws. It's energy and casting simply make for a great film watching experience. Throw in a gloriously well shot and tense finale (taking the chess game literally with all kinds of pieces falling into place as our two rivals play out everything in their heads) and this second "Sherlock Holmes" film is a must see for anyone looking for a good way to kill a couple of hours. It's charming and highly recommended.