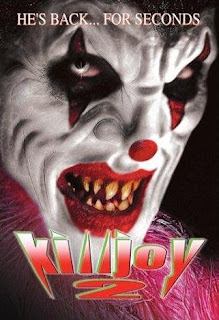 Hands down the LAST film in the universe  that deserved a sequel is fucking "Killjoy" and I doubt it had enough of a following to warrant one but I guess when a films budget feels like it was only $10 it is guaranteed to make money in the end. Well two years later "Killjoy 2", an even lower budgeted sequel, infected video store shelves and guess what... it's basically as bad as the shit original with one aspect I dug a little more to warrant it a half a blood drop higher in it's dismal rating. 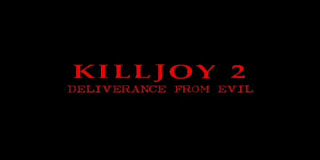 Some inner city troubled youths are taken by their parole officers into the middle of the country to do some therapeutic bull crap. Of course they break down in a non-cell service area (here's a hint, don't take dangerous youths to areas with no cell service!) so one of cops has to hike to a nearby house where one of the fuck-ups gets his ass shot off for trespassing. Needing help they plead with some voodoo babe but not before one of the girls calls upon the demonic clown Killjoy (Why? Still not quite sure) who predictably decides to go on a rampage.
It's hard to believe but this sequel even ad a LOWER budget than the original, by about a 100 grand! Even with a much lower budget (which is hard to imagine) the style of this film is a hair better thanks to a director making this look like an actual film (well, maybe more like a film student production) as opposed to a home movie.  They are able to do this by shooting most of the films plot in the woods (a staple of all low budget cinema) and by having Killjoy appear in the 'real' world as opposed to victims being sucked into his demonic realm (hence no shitty computer effects... YAY!). The acting on the other hand is just as shitty as the first and the plot is just as toilet paper thin.
What I like about this sequel better (hence the higher rating) is the recasting of Killjoy with actor Trent Haaga. This guy throws all he has into the role making it energetic and he even got me to snicker at a few of  his bad "Freddy Kruger" comedic  one-liners. Even a snicker is better than tying a noose around my neck, which I did while watching the original. Sadly the Killjoy charater doesn't show up until over halfway through the film and when he does, the character feels wedged into a film in which he doesn't belong.
I 'enjoyed' "Killjoy 2" ('enjoy' may not the proper term) thanks to the new actor playing the title character, but this is still a shit film in the bottom of the barrel of brown trout. The acting, script and plot holes makes this damn near unwatchable and just when I was about to shut the damn thing off, Trent Haaga as Killjoy appeared to making it barely viewable to the very end. Did they make a "Killjoy 3"? Of course they fucking did but at least it only gets better from here.

Want to purchase the "Killjoy" 3-film set? Do so at the link below!
Posted by Cronosmantas at 7:43 PM