First off I want to start out with a little personal history with this title. Several years ago while at a comic-book convention in Minnesota I was given a goodie bag/ door prize. Like most goodie bags it was filled with shit nobody wanted such as stickers, posters, and of course mass produced comics from various companies. I, of course, tossed it aside for a few months not thinking twice about it until doing a little spring cleaning I discovered it again. Long story short it contained the manga Battle Angel Alita Vol. 1. Having never read a manga before I thumbed through quickly and was immediately captivated by the visual appeal of the book, it took me a minute to realize that it was a backwards book but never the less I figured it out.

After reading the first volume I set out for more with very little luck, (small North Dakota town) eventually I gave up the hunt and thusly never finished the series. Recently I decided to start looking around for Battle Angel stuff when I discovered old news recent news like the ever famous James Cameron planning a live action launch of this title and who better to do that project. Rumors are even out there that the technology used for his film Avatar was basically a test for this movie. Anyways while searching the world wide web I found that Battle Angel was also had an anime version so I picked it up and here are my thoughts.

The film is really just 2 half hour episodes one called Rusty Angel and the other titled Tears Sign.
The now defunct ADV put this little gem out in 1999. So yes the animation is a little dated but I didn't have a problem with it. 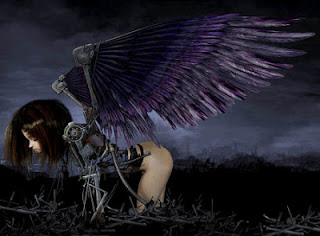 The story:
Set in the city known as Scrap Iron City which is just what it sounds like it would be. A big ass junk yard where the cloud city Zalem dumps all of its trash. While out looking for parts Cyber doctor Ido finds Gally's broken cyborg body hidden in the junk. He rebuilds her and she becomes like a daughter to him. There is a boy named Hugo that does a lot of odd jobs around the city trying to save up enough money so that he can achieve his life dream of going to Zalem he and Gally become friends and possibly more. We learn that both Dr. Ido and Hugo have some pretty dark secrets.  There is a lot of story going on in this film.
You have people that harvest body parts mainly spine thieves since you learn that body parts can be replaced with cybertronics well everything but the spine naturally. That brings about the villains in this story, from the brutal spine thieves to the brain eating Gladiator Grewicia to the evil Mr. Vector. Vector runs a cyborg gladiator fighting ring and employs Dr. Chiren who just so happens to be the former partner of one Dr. Ido to fix the broken fighters.

During a curious night out Gally discovers that Dr. Ido midnights as a "Hunter Warrior" which is basically a bounty hunter and since there are no police in Scrap Iron City this the only way to keep it safe. While watching Dr. Ido fight, Gally learns she too has secrets. She has no memory of her past but her body remembers. Skilled in the cyborg fighting style of Panzer Kunst she sets out to become a "Hunter Warrior" herself, collecting money for every bounty she looks to go to Zalem with Hugo.

Again there is so much going on here I do not want to ruin anything for someone that's thinking about watching this film. I have heard that fans of the manga will not like this version. Creator of the series Kishiro Yukito was not a fan and there are no plans of an anime series coming out. I strongly suggest watching this before reading the manga and since I only ever read the first vol. I am not ruined by it. I will now pursue the rest of the manga series. Overall I liked the style of the film. The animation still played well, it reminds me of others from the 90's so if you like anime from that time frame you should not have a problem with this. The voice acting was pretty decent,although my only gripe is too much yelling and grunting. There is a small amount of nudity and adult situations so if that bothers you then why are you on this site (kidding ).

Pretty solid film, I only wish there was more because it felt like it is missing some story. Knowing there is a manga series probably didn't help that feeling.  With that said I strongly recommend this film.