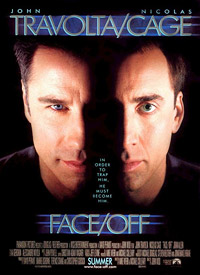 It's hard not to feel somewhat bad for John Woo. Despite his amazing talent as a director to create fun and invigorating films, here in the US they ditched some of the shittiest action scripts on his shoulders. Prime example: "Face/Off". This duel lead actioner featuring Travolta and Cage at some of their cheesiest is quite simply a horrible idea at its core. Sill, ill-explained with science fiction bits, and overly long aptly describe this film...yet somehow and in someway, John Woo is able to make it massively entertaining.

Sean Archer (Travolta) has been chasing Castor Troy (Cage) for years. After the terrorist Troy killed his son in a botched assassination attempt, the FBI headhunter has been doing his damnedest to track him down and bring him to justice. When they finally do, they discover that he has hidden a massive bomb somewhere in the middle of Los Angeles. So Archer decides to take a massive risk and have his face removed to only have it replaced with that of his comatose nemesis to go undercover to dig out the threat (?!?!). To make matters worse, the monstrous terrorist awakens form his coma only to take the face of the determined hero and turn the tables.

Despite the critical success of the film (it holds a 94% fresh rating on Rotten Tomatoes still), don't let anyone tell you that the film is a whole lot more than a gimmick. If they do, pull out some double pistols, do a barrel roll, and give them a thing or two to talk about. This film is so focused and centered around its face switch plot that it often forgets that there are other aspects to the film here. Secondary characters are brushed over, subplots of different interactions and themes are touched on and then ignored, and our leads become caricatures of one another as they are carved straight into the gimmick. Most of the logic is left at the door and I'm not just talking about face transplants that heal in hours or voice modifiers that are implanted in throats. I'm talking about the lightning fast pacing and often lengthy plot progression. Characters are haphazardly thrown about and even some of the settings are beyond ridiculous like a top secret oil rig prison called Erehwon (that's nowhere backwards for those who don't know) where inmates have to wear reject boots from the "Super Mario Bros." movie that are magnetized to the floor. Trying to follow any kind of true emotional arc or logic flow is asinine for the viewer, so I recommend not even trying.

Once you decide to toss off the old shackles of logic, then and only then can one truly enjoy "Face/Off" for what it is. Firstly, the action is awesome. John Woo might not be able to make the film feel shorter than it is, but he certainly entertains. Gun fights galore litter the film (it's John Woo, would you expect less from the gun-fu wizard?) and the finale goes from a church shootout, to a standoff, to a boat chase, to hand combat as quick as it can. This is elevated by the scene eating abilities of our two leads. Do their characters really make a lot of sense in what they do? Not really. Do they gobble up the dialogue and inject massive amounts of ridiculous cheese by acting like each other awkwardly? Damn fucking tootin. Cage and Travolta make this movie has memorable as possible with their ability to chew up screen time and their banter on screen easily make "Face/Off" a B-action film highlight.

Even though "Face/Off" is one of the more gimmicky and illogical scripts that 90s action films had to offer, it's a surprisingly entertaining effort due to some serious charm from our director and two leads. Take the film with a grain of salt, enjoy its ridiculousness, and you might have a great time watching it. I did.

Written By Matt Reifschneider
Posted by DarkReif at 3:58 PM