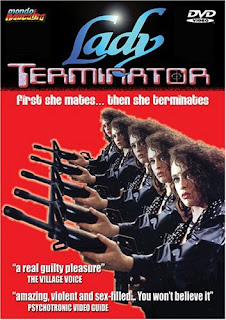 One of my favorite hobbies is trudging through the bloody trenches of foreign remakesploitation trashfests of popular American films. Most of these films emerge from Italy, my personal favorite place for schlock cinema but further beyond, near the Pacific Ocean we get plenty of Asian trash thanks to a little country known as Indonesia, home of one of my all time favorite rip-off guilty pleasures in the form of "Lady Terminator", an almost beat for beat silly carbon copy of the James Cameron hit "The Terminator". 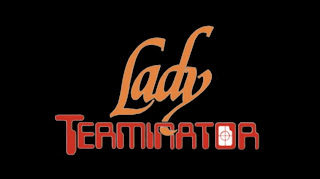 The film, surprisingly, starts off about as far removed from a Terminator rip-off can get by having Asian mysticism work its way into the mix. We get the Queen of the South Sea vowing revenge on her hundredth suitor as he takes her sexual magic away by removing an eel out of her vagina (it must be seen to be believed!). Instead of killing him there, she decides to vow revenge by killing his great granddaughter. Years later a sexy dimwitted anthropologist (only one brain cell shy of the Kathy Ireland geologist in "Alien from L.A.") gets possessed by the Queen only to be turned into the damn Terminator, roboticly going through the motions of the Terminator script to kill Sarah Conner... err... I mean the granddaughter.
Despite starting off like a typical mystical Asian fantasy, the film sure turns into a "Terminator" rip-off real quick. It not only rips-off, it god damn copies all the exact same action scenes from the movie! Everything from the club shoot-out (complete with the line "come with me if you want to live"), to a cop car chase, to a sex scene with the emphasis on hands, to the police station assault are all directly stolen. Hell they even work in the notorious eyeball removal scene which really has nothing to do with the plot. If you watch "Lady Terminator" before watching "The Terminator" then you might as well not watch it as you've basically seen "The Terminator", just a dumbed down, silly Asian version of it.
Unlike Cameron's film, "Lady Terminator" serves as an unintentional comedy with hilarious, side splitting dialogue with deadpan delivery by a bunch of would-be actors. Our "Terminator" is a dimwitted hoe but I do have to admit she does look sexy in a crazy sense when she's blowing guys away by shooting them in the crotch with an M-16. Our Kyle Reese wanna-be is dull and only livens up the plot with his shit dialogue. My personal favorite character has to be our Reese sidekick which looks like Nicolas Cage with a mullet acting like Spicoli from "Fast Times at Ridgemont High".
"Lady Terminator" is a trash movie fanatics dream come true. I can't express how much fun I had with this remakesploitation schlockfest. Everything from the dialogue ("I'm not a lady, I'm an anthropologist!") to the copied action scenes makes this a must own for cult film fanatics. Hell it would even be fun to make a drinking game out of it, as in take a drink for every obvious "Terminator" rip-off sequence. Scratch that, because by the end you would die of alcohol poisoning.