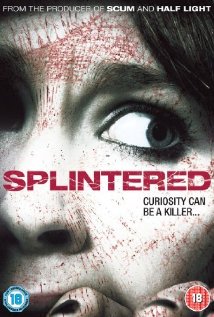 Going into "Splintered", I was hoping for a clever psychological horror film that would quench my thirst for high quality low budget indie genre films. What I got was a scrambled film whose strong production values only cover up some of its massively cliche moments and squandered concept. There is plenty to both love and hate in "Splintered", but when the credits began to roll it was hard not to feel apathetic about the entire experience.

Sophie (Weston) has been struggling her whole life and a distorted memory of her being attacked by a monstrous wolf like creature as a child haunts her. This is what drives her and her friends out into the woods to investigate a mysterious series of killings that have been linked to an animal like creature. What she discovers out in the woods is not the monster she remembers, but a whole new one...one that might be both human and animal.

What initially plays out to be a psychologically spun version of a werewolf film decidedly wants to take a few twists and turns to wrap itself into something completely different. Normally, I have the utmost respect for this idea and even with "Splintered" I admired their gumption to really push through and try something new. With some clever directing that highly utilizes the setting (its a dark forest and an abandoned church...not all that original, but expected when it comes to low budget horror) to build some solid enough suspense and tension and sleek looking production values sans some oddly placed poor stunt work and special effects, "Splintered: has things to love. Visually the film might run cliche at times, but its strong enough for what it is and for that I give the film credit.

The pacing of the film is hit or miss and so is the acting. For every solid moment of good terror or tension, there is an equally bad one of paper thin characters bickering. The lead actress carries the film decently, but her secondary cast can be terrible. The priest with a chip on his shoulder seems poorly written in and feels like obvious padding to "deepen" the plot and her friends are delightfully naive and change their moods at the push of a button. This adds nothing to the rather scrambled telling of the story that shifts its focus multiple times throughout the film. What starts off as a potential werewolf film kicks into something even more cliche (not giving out any spoilers here!) for modern audiences and it loses some of its potential there. "Splintered" tries to throw in enough twists and turns, but rarely are they effective or all that clever to take this film to the next level.

"Splintered" is far from being terrible in its own right as it simply succumbs to its own twisting plot and low budget priorities. The scares rarely scare despite its great atmosphere and the acting adds nothing new to the film to get it's viewer interested. Mostly recommended for those looking for an easy way to kill a few hours on a film and some nice bonus features on the Blu-Ray/DVD combo pack. Otherwise there are much stronger indie horror films out there.