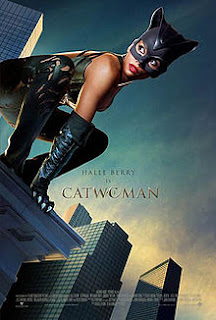 When a film is wildly considered by critics (and fans) was one of the worst film's ever made, you know you have something special. "Catwoman", the pseudo-spinoff of the DC Comics character, is just that. It's very special. So special that leading lady Halle Berry showed up accept the Razzie she won with her previously won Oscar in hand and stated in her acceptance speech, "First of all, I want to thank Warner Brothers. Thank you for putting me in a piece of shit, god-awful movie... It was just what my career needed." She definitely wasn't far from the truth and since "Catwoman" was released...her career tumbled with it. It's seriously that bad.

Patience Phillips (Berry) is a mess. She's an odd artist and graphics designer for a massive beauty company and beyond trying to keep her head straight, her personal life is in shambles. In a desperate attempt to keep her job, she ends up stumbling upon a secret about the new line of beauty product. It's addictive and upon stopping usage...it scars you for life! Upon learning said secret, the company goes to put Patience six feet down by throwing her down a sewer drain. Lucky for her, a mystical Egyptian cat gives he a new set of lives by breathing on her and gives her the powers of a cat and the mindset to make things right.

Just reliving this film by typing that synopsis gave me a headache. This film is really that bad. It's hard to even know where to begin. So let's start with the foundational story and script. It's crap. Crap. Crap. Crap crap crap. I appreciate that the writers wanted to take it in its own original direction without stepping on comic book purists' toes. Had they done that, I'm sure people would have stormed theaters and burned prints of the film. As is, the film really tries to focus on a character I could care less about, surrounding her with characters I could care even less about, and throwing them into a situation that makes no sense. What does this beauty product actually do? If crappy villain Sharon Stone is proof...it turns you into marble? What?! And the forced romantic sub plot is about as cheesy as it can get. In all honesty, both the Ferris wheel and basketball sequence are abysmal. Throw in some poorly placed action set pieces in between the slices of crappy characters and crappy plot and you simply have a crap sandwich. Delicious!

With no investment in story or characters, one could only hope that the film is entertaining. If you count unintentional humor, then I suppose "Catwoman" is. Multiple times I had to pause this film from laughter. Not intentional laughter mind you, but laughter nonetheless. The director, who goes by the name Pitof...and I'm assuming the last name is Despair because that's what he brings to this film, layers on the style, music video looking designs, and editing so thick...it's hard to see anything else. There are so many swooping camera zooms and shitty CGI Halle Berry's running on all fours that its just damn funny. The action sequences are almost unmanageable to keep focused and when I was sure what was happening it didn't make sense. Once again, the Ferris wheel sequence is a prime example of this. First person point of view for a type of 'cat sense' that allows her to save a falling child from the crappiest Ferris wheel ever made? Wow. You just went there "Catwoman." You just went there.

It's hard watching these relatively strong actors desperately try to push through the film by marionette-ing their bodies through the motions when its obvious they all knew this film was a joke. The action is edited to hell with way too much crappy CGI, the story is laughable, and the direction is all style and no substance. When critics said this was one of the worst films ever made...they were selling it short. It's not bad...it's abysmal.