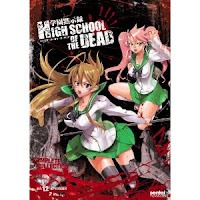 Here we go! My first series review, I toyed with this for awhile trying to decide if I should give an episode by episode grade or just as a whole. I decided as a whole, if you guys would like to see it done differently please share thoughts and comments.

If there were ever an anime that is perfect for American live action tv  adaption I think this would be it. This series is ripe with pop culture references that would certainly appeal to western audiences. It has lots and lots of zombies and who doesn't love zombies. So if you are a fan of the hit series from AMC's "The Walking Dead" this might be a series you would enjoy (it's true I do watch other kinds of shows). This is the English version that I am reviewing.

The story-
Zombie apocalypse! A group of highschool students from Fujimi High must battle their way through the dead and destruction that has fallen upon them. The group includes:
Takashi Komuro- The Hero
Rei Miyamoto- The Ex-girlfriend
Saeko Busujimo- The badass with a sword
Saya Takagi- Spoiled rich girl and life long friend of Takashi.
Kohta Hirano- The fat kid with a crazy love affair with guns
Shizuka Marikawa- Idiot school nurse
Alice Maresato- orphan picked up along the way.
Other than the zombies in the series we also have a few different story arcs and enemies that show themselves through out. The character development is pretty dang good in this series. All of the main characters have some sort of connection with one another even if it is as minor as just being classmates. Think back to your school days or if you are still in school. I can remember and name pretty much everyone I ever talked to or sat next to

We have Takashi and Rei who as children made a pinkie swear to marry one another, but fell apart over the years due in large part to Takashi's inability to make decisions. Which added a bit of tension between the two made more so by the fact that Rei is dating his best friend. Then there is Saeko and Rei. Not sure the story here, but a few hints were made throughout the series that maybe there is more to their story (possible relatives?). Then there is Saya and Kohta, rich girl and fat kid. She picks on him throughout and he is head over heels for her, and is basically her protector from start to finish. Of course we then have the school nurse and the orphan. Both really didn't add much to the series other than Shizuka remembers she has a friend that happens to be a military type with a safehouse and weapons for them to use. She is basically the getaway driver.

I really like how this series gave pretty much every main character attention. As we follow these students we learn about their backgrounds, families and social orders. The action scenes are topnotch and I would really like to see this done in live action. The relationship between Takashi and Rei and then Saeko is pretty decent developement wise. Everyone needs a love triangle to follow and actually care about. I know I did. It's like the Peter Parker, Mary Jane, and Gwen Stacy triangle we all have our thoughts on who should be with who. There is so much going on in this series and it all ties up pretty good,  the exception being the Saeko and Rei story. I hope they touch on it in Season 2. Then there is Saya and Rei. While not as noticable from a story arc stand point, we the viewer are lead to believe there must be something here. Rei's father is a cop and Saya's father is a big powerful ruler of the Takagi family and ultimate badass. There is connections between the two but the story is playing coy with the viewers here.

Being faced with so much death and mayhem the students have to adapt and do it fast. Faced with endless problems from resources, to zombies, to more enemies such as thugs and main antagonist Mr. Shido a teacher from their school that is bat-shit crazy, from his first scene where he leaves a student to die due to a sprained ankle even goes as far to kick the kid in the face to make sure he stays behind. To a scene where he has turned students into sex slaves? Our heroes save Mr. Shido and several other students from certain death while escaping the school via bus.

Right away you can feel tension between Mr. Shido and a few students mainly Rei and Saeko. Which ultimately leads to Takashi and Rei off on their own for a bit. While this story arc basically goes away for most of the series it does get wrapped up in the final 3 episodes.

The first 3 episodes start out strong but from there it gets kind of slow. Which is probably meant to be more of a realistic point of view. I am not gonna lie I almost gave up on this series but the final 3 episodes really saved this series for me. 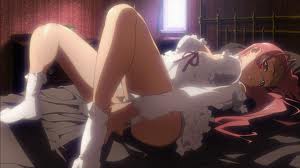 FAN SERVICE-My biggest complaint with this series is the fan service, there was so much it was driving me crazy. Don't get me wrong I love the female form as much as anybody but good God this series was out of control with boobs and ass shots. It was pretty impressive how many different ways the director found to use boobs. At one point Takashi is using Rei's boobs as a stabilizer for his AK-47. This almost killed the series for me it took away from a lot of great things going on with the series. 'Arg!!!' is what I felt every time they used sound effects for bouncing boobs , really is that how boobs sound? Nooooo... its not. Okay. I am done ranting. 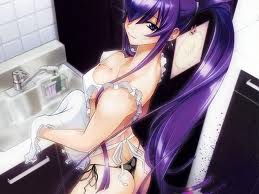 The Art- Very stylish I loved the action scenes and there are plenty of them. I think every episode has at least one sweet action scene. Well done I say!


Final thoughts- You ever have something you want to love but no matter how hard you try it gives you reasons not too? That is "Highschool of the Dead" for me. I really wanted to love this series, but the over the top fan service just doesn't work in this series it is so unnecessary . The story is pretty solid, the art is good, and the voice acting is good. With Jessica Boone, Taylor Hannah, Leraldo Anzaldua, Maggie Flecknoe, and Mark X all doing better than average jobs. I was losing patience with series towards the middle like I said above but then Episode 10-12 really came together and made this a must see for anime fans or genre fans. Like Takashi says this series goes out with a fucking bang!

Loved the review? You can purchase this and other recommendations from John Price at the links below!