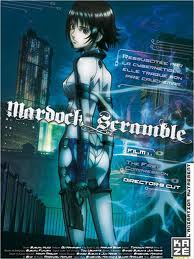 Wow! Is the first word that comes to mind after watching this film. The first of a trilogy, but the only one available stateside. Intense? Indeed it is. Dark? Yes, very dark from the subject matter to the art style. This is not for everyone.

The story:
A 15 year old prostitute named Rune Balot (English voice actor Hilary Haag) is saved by a Dr. Easter (insert resurrection theme) after being basically murdered. She is brought back by the choice to live via the Mardock Scramble 09 which is an ordinance for preserving life by any means. She is then turned into a cyborg with the power to manipulate electronics and since her own vocal system was damaged she speaks through different devices. Which leads to a few creepy yet funny moments. She is teamed up with a golden mouse named Oeufcoque (English voice actor Andy McAvin), but he is not just your run of the mill golden mouse. You see this little guy can basically turn into any weapon she needs him to... thusly creating a soldier given a choice to fight against those that harmed her, mainly the bastard Shell. Shell is a crazy ass head of a casino and pimp. He does what he wants when he wants and to whom he wants. Dr. Easter is building a case against him and he is not going down without a fight.

The art:
I for one like the dark futuristic city setting. It works very nicely with the tone of the film. Kind of like "Blade Runner" type feel to it. I know we can say that about a lot of different anime films and series but I think it really works here.

The film:
The film is well put together. From opening to giant cliffhanger ending (remember trilogy) it all sets up nicely. You learn more about the human side of Balot through a series of flashbacks which pulls things together for the viewer. The building of characters and their relationships was spot on, I actually cared about these characters and wanted to learn their stories. I especially like the build of Balot and Oeufcoque which makes sense being that they are now a team, so to speak. This movie does contain a fair amount of nudity so viewer beware and again I will remind you that the subject matter involves rape, incest, prostitution, and torture. However if you are okay with that stuff then I will highly recommend this series of films. I am left wanting and waiting for the next film.

The voice actors:
This is the English dubbed version and I have not seen the Japanese version so I wont try to compare the two. With that in mind I thought both Hilary and Andy were great. At times it felt like Andy stole the show with his wide range of emotion in this film. There are also other English voice actors to give notice to as well such as Chris Ayres, Andrew Love, and Kalob Martinez as Shell.

At the end of the day I really liked this film. Maybe I am just a weirdo (hey now!) or maybe its just a good movie. Give a look for yourself and you can comment back let me know what YOU think!

Written By John Price
Posted by Unknown at 8:00 AM