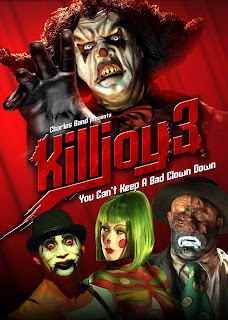 In 2009 Full Moon president Charles Band announced that that they would be making three sequels that would mark the companies triumphant return to their loveable B-movie roots. With the company floundering for years and being a fan of their output during their glory age of the early 90s, I instantly became curious what the sequels would be. The unveiling showed that they would be "Puppet Master IX", "Demonic Toys 2" and.... "Killjoy 3"?! I can completely understand a sequel to "Puppet Master" and "Demonic Toys" as they are two of the companies most popular films but why the hell would they make another sequel to fucking "Killjoy"? The first two "Killjoy" films were made during the era when Full Moon Entertainment was at absolute rock bottom and they ended up so flippin' bad that I don't know a single soul that enjoyed a second of them. So why make a sequel to a series of films that absolutely no one liked? Well to my astonishment not only was "Killjoy 3" better than the first to shit entries, but I also enjoyed it more than "Demonic Toys 2" and "Puppet Master IX". Seriously did hell freeze over or something?! 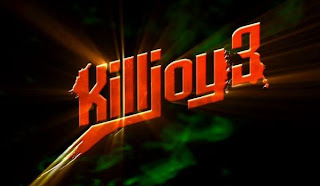 "Kiljoy 3" opens with a professor visiting a voodoo priest in order to raise our demonic clown Killjoy for revenge. He skips out on the deal, pissing Killjoy off and Killjoy somehow (reasons unknown) ships an evil mirror to the professors house and ends up tricking some college kids into coming in the mirror so Killjoy can toy with them in his demonic realm in order to steal their souls.
The first thing about this sequel that blows the other films away is the obvious improved production values. Sure the film is still ultra low budget but this time it actually looks like a film, as opposed to a home movie or a student production.  The second is the acting is a complete stairway above the non-acting of the previous two, enhancing the enjoyment immensely. The third is the addition of sidekicks to the Killjoy character, which includes Batty Boop (a sexy clown babe that walks around in the nude), Punchy the clown and Freakshow. They add some flavor to the film, allowing for more interesting toying with the main characters.
The main attraction is the return of Trent Haaga as Killjoy, who was the ONLY thing worthwhile in the second entry.  He seems to having ball playing the Freddy Krueger inspired knock-off and killing off our disposable young adults in is demonic realm, which is equivalent to Freddy's dream realm.  Other than our demonic team, the rest of the characters are typical fodder for the slaughter and are just as paper thin than any of the numerous meat puppets in the Elm Street sequels.
Considering the dire reputation of the first two "Killjoy" films, I should never have enjoyed "Killjoy 3" but alas I did! Not only did it make me forget the shitness of the first two films with its higher production values and tighter script, but it's the most enjoyable Full Moon feature I've seen in years. Sure it has the typical limitations and flaws of low budget cinema and slasher films in general but at least this one entertains, which is more than I can say about those OTHER TWO FILMS! Pretend those don't exist and skip directly to "Killjoy 3". Make believe there's no "3" in the title and consider it the first "Killjoy" film... you'll be glad you did.

Written By Eric Reifschneider
Posted by Cronosmantas at 12:23 PM