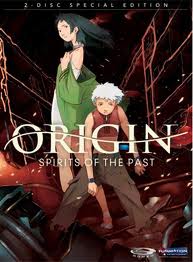 From the opening theme song I kind of got a good feeling about this movie. The song is Giniro No Kami No Agito and from my experience it is one of the few opening songs that really caught my attention. Not because of how it sounded, but more for the content of the song. You learn through the lyrics of this song that the Forest will play a large role in this film.

Set in a post-apocalyptic future where the moon has been destroyed, the story centers around the young boy Agito whose father helped build Neutral City which is the main setting. While out on an adventure Agito discovers a girl in a pod so to speak. This girl Toola is from a time before the moon was destroyed. Agito accidently wakes the girl and sets out to help her adjust to this new world. Toola has trouble accepting the new world and is convinced by a Colonel Shanuck of Ranga who, like Toola, is from a different time to find a device that will fix all that is damaged. Toola of course is the key to finding this item.  The item known as Istok could just as easily destroy the world as save it, and this is something the forest can not allow.

The story isn't a new one by any means, but its pretty decent. The writing isn't what this movie is about, it is very much an action film. I really enjoyed the art work at the beginning of the film, however when all the action scenes started the director went with two different art styles and I really didn't enjoy it. Actually I found it quite distracting which is a shame because it took away from some really nice fight scenes.
As far as the story goes it was certainly missing depth, they could have gone more into Ranga and the world before the moon was destroyed. However they did not and thusly I felt a little short changed in the story area. All was not lost, I would be doing the film a disservice if I said so. You get just enough story to keep you interested, but a lot of questions go unanswered and character development is pretty nonexistent especially with Toola who kinda feels like a dry piece of toast with no jam or peanut butter. Agito is pretty much a typical young boy anime character who likes adventure and maybe is a bit mischievous. Otherwise non of the other characters were even really touched on. Like i said before this film is mainly for the looks. Which is fine if you just want to watch stuff blow up. For me this is a film I am not likely to watch again.

On the positive side the soundtrack was pretty sweet. I actually really enjoyed it. Keep in mind that I watched the English dubbed version which isn't what I would normally do and I must say the voice acting is pretty solid. We have Chris Patton as Agito and Carrie Savage as Toola and they are very prominent in other Funimation titles. All in all if you are in a mood to watch a film with cool action  scenes and not a loof story then by all means check it out. Thanks for reading, any feedback please share.

Written By John Price
Posted by Unknown at 11:11 AM