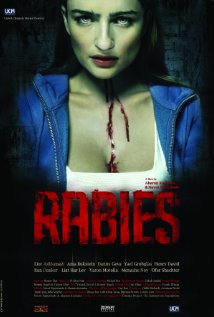 As a cult film fan, its hard not to strive to dig up some rare material. At Blood Brothers we take a certain pride in it. That's why I simply had to see the Israeli horror film "Rabies." It was the only full length film I missed at the 2011 Mile High Horror Film Festival and I've regretted it pretty much every day til it was released on home video because I only heard great things about it. Now that I've finally watched this film...I don't regret missing it so much. The film is certainly unique in many ways as it toys with the cliche slasher elements and pushes away from them, but ultimately it left me apathetic towards the entire thing.

Two young folk (David and Harley) who are running away from home accidentally stumble through the woods and straight into a serial killer's trap. In an attempt to escape, they unwittedly involve a car full of more young folk, a ranger, and two cops into the worst day any of them can imagine where the paranoia between them and their own inhuman flaws may pose an even greater threat.

First of all, why the hell is this film called "Rabies?" Not only does it not have rabies in it, but it has nothing close to any kind of killer virus or related elements. Nor does it have anything to do with any sort of vampire/undead ideology like the cover would indicate. Sort of skewed my expectations right off the bat to find that the film would be more along the lines of a slasher...and even then a rather unusual one that doesn't follow those guidelines either.

So what kind of slasher is it, you maybe asking. Well, its one where the slasher serial killer is practically irrelevant. He makes sort of a brief appearance towards the beginning and then sort of drops off for most of the rest of the film. What this does do, is that it allows the film to really embrace its clever spin and ideology. We have all of the cliche elements in the film: isolated woods, teens, broken down cars, and all those great obvious personalities to go with it all. "Rabies" then takes this all throws it into "worst day ever" mode with heightened paranoia and extreme emotions then lets the characters boil over and do horrible things to one another. In a way, it takes the classic slasher and gives it a modern style that's not necessarily the overused and poorly defined 'torture porn', but something of a similar effect. It's people just doing awful things to each other.

The film does happen to go about it in some in some unique ways. The directors obviously have an eye for some visual style despite any kind of real setting besides a forest (the scene where our initial victim thinks he gets his revenge with a sledgehammer has a great silent moment that earns a memorable spot) and the film occurs completely in daylight which is splendid change of pace. It also happens to love to use some black humor to spice up the film. Characters say ridiculous things, some of the deaths are a blast (pun intended for my favorite), and the timing on a few things is really well established. Although at times it was hard to tell if the film was intending to be funny, upon reflection after a little more forefront humorous ending, it does it quite well at times.

The big concerns that "Rabies" left me with are generally about how much I felt invested. For horror to really work, particularly of the more standard types, it has to really work your nerves. Since this film rarely utilizes jump scares for those moments, it desperately needed for the audience to buy into the characters and the situation for the viewers to 'feel in the moment.' "Rabies" just doesn't quite work that out. Some of it is the humor, which is an obvious pull out of the situation, but most of it occurs from too many characters we just don't learn to care enough about. There's no real protagonist to root for and despite some of the great plot twists that these separate groups of characters create - it divides too much screen time between them. Even the strong acting can't quite divvy out the empathy.

"Rabies" was certainly a fun watch to see how they cut a new style into a rather run down genre. The humor is rather well executed and generally speaking I loved the direction and on screen work. Unfortunately, for this reviewer, much of it felt flat to me - neither kicking out the laughter or the horror and sort of meanders through without a real endgame sense of urgency. Definitely for those looking for a unique horror experience and still comes recommended for horror fiends.