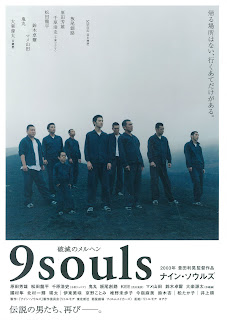 9 Souls initially was off-putting and I didn't care for it, so much so that I actually didn't get through it all on my first watch. A couple of weeks passed and I returned to this depressing yet goofy world and, I must say, this time around I was completely won over. The plot is fairly thin, but sets up a most interesting road movie. A young man is sent to prison, accompanied by nine other cellmates. One cell mate is offed after speaking nonsense about 'holes'. Quickly the nine remaining inmates find this hole, and breakout of their prison.

The rock 'n roll / punk spirit of the previous two Toyoda films I saw (Pornostar, Unchain) comes back even stronger in this film. The music, while I'm no expert, has a very electric vibe and really helped push things along. There are nine characters to keep track of, and while most of them aren't likeable at all, they are all fairly well fleshed out and you become interested in their goals and aspirations, once they escape from prison. Each has a very distinct mission to carry out and each succeeds, in some form or another, though things more often than not don't turn out so pretty.

I feel like this is a film that will have more meaning the more I revisit it. I loved that the film could mix slapstick and bleak moments with ease. There was a David Lynch vibe too, but it was very much in its own style too. The weirdness here all seemed to fit this odd, yet familiar world that these lost souls wandered about in. I think Ryuhei Matsuda gives one of his most subtle and powerful performances of his career. I don't know the name of the oldest member, but he and the tiny inmate, along with Ryuhei, were my favorite characters. All of their payoffs were quite powerful.

I think, and this isn't spoiling anything important, the only scene that I really disliked was towards the beginning. The crew wrecks their van after their first night out and, long story short, they are at a farm, there are some goats, and well it's easy to fill in the blank. I didn't find it funny or revealing to any aspect of the numerous characters involved in said situation. My other problem lays in the fact that a couple of the characters don't really do much and the revelations are a bit weak. I don't expect gut punches from everybody, but they just all don't mesh quite as well as others. It's a bit unbalanced. Those aside, fantastic movie.

In the end, 9 Souls is really impressive and it is easily the best of the Toyoda films I have seen thus far. Hoping to further explore his works sometime. If you only see one of his films from the early era, it's a safe bet that this is the best one. It will not be for everybody, but for those looking for something a little different, I can't recommend this one enough.