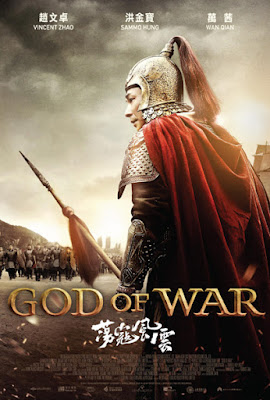 When one looked at the sheer amount of talent that was being utilized for God of War, it could almost be scary. Between director Gordon Chan, Sammo Hung, and an impeccably crafted cast anchored by Vincent Zhao, this film should be the epic war film of decade from the Chinese market. While the film occasionally slips into some cheesy territory, God of War does not disappoint as an epic war film and goes a step further by including some impressive moments that I did not expect going into it. God of War is truly massive from its dramatic heartfelt characters to its engaging blend of entertaining popcorn moments to its larger than life battle sequences. This is a film that does not hold back and it’s two hours of pure dynamic and dramatic action entertainment and perhaps the best film Gordon Chan has developed in a decade.

General Qi (Vincent Zhao) has quickly risen through the ranks to be one of the best generals on the field and his chance to truly prove himself is assisting General Yu (Sammo Hung) in finally pushing a massive group of Japanese pirates away from the shores of China. When politics come into play though, Qi finds himself without Yu and facing an ever growing group of pirates, lead by a vicious Japanese commander (Kurata Yasuaki), in a game of chess that will find each one at each other’s throats.

Gordon Chan has had a fascinating career as a director of developing artistically valid popcorn flicks and after spending a good number of years working on his spectacle driven super-powered wuxia series The Four (you can read reviews for all three of those HERE), it was nice to see him pull back into a more grounded film. His steady hand at balancing an entertaining blockbuster and a dramatic war film is in full throttle with God of War. He takes a confident stroll with the film, merging massive spectacle war pieces (complete with slow motion dramatic moments, some shocking violence, and classic martial arts elements) with dramatic narrative shifts and it makes for a film that never drags despite its robust cast of characters and layered plotting. Occasionally the film wants to explore some interesting territory that it doesn’t get the chance to really dig into, including a wonderful film stealing role for Wan Qian as General Qi’s wife and her dynamic as a leader and balance to our main hero, which is a shame, but overall Chan delivers on a lot of promises with God of War making it a huge surprise success that even I didn’t expect.

Of course, Chan has a lot of help when it comes to delivering on those promises with the film. Perhaps his biggest asset is the action to balance out its dramatic set pieces. The battle sequences and smaller martial arts fights are stunningly well executed in the film. It’s obvious that there was time and focus placed on delivering iconic and emotionally charged action sequences. Whether it’s the siege sequence of the opening act, the repeated larger scale battles of the mid-portion of the film, or the classic martial arts dynamic of the finale where Zhao faces off against Kurata Yasuaki in a one on one duel set to a burning ship that’s about as classic as it gets, God of War is bursting with dynamic action.

As I mentioned, God of War can occasionally come off as cheesy as the narrative has to quickly move through some emotional set pieces to be able to cover all of the plotting and character development needed to tell its story, but it feeds into the popcorn entertainment aspect of the film rather fittingly. When it needs to, the emotions of even smaller characters resonate at a perfect pitch, again I’ll mention Wan Qian who steals the film with her chemistry and screen presence, and it adds a solid amount of heart that grounds some of those cheesier moments. Vincent Zhao, who generally owns most movies he’s in even when they are pretty terrible (I’m looking at White Haired Witch on my movie shelf right now) anchors the film though and gives a great performance worthy to be mentioned as one of his best. He’s loud, subtle, and completely invested in making sure that God of War has a hinge to work on for the rest of the cast. He’s surrounded by a fantastic cast, many of whom can be just as engaging as he is like Kurata Yasuaki as the film’s villain or Sammo Hung in a large cameo as Qi’s boss that bows out after the first act, and it layers the film with more weight to make its epic tone work.

I was certainly hesitant going into the film that the combination of director, action, and cast would be almost too good to be true and that this film would somehow come out as a massive disappointment, but the film nails it. God of War is a commanding film that delivers heart, excitement, and entertainment wrapped in an epic historical setting that deserves to be praised. Fans of Hong Kong action and Chinese Mainland spectacle are both going to enjoy what God of War offers up. It’s massive action entertainment at its epic best.