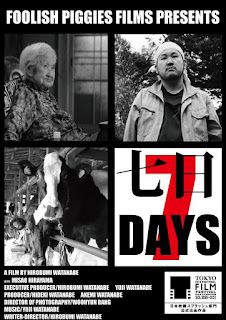 After having the unexpected pleasure of discovering Watanabe's debut work, And the Mud Ship Sails Away..., brought to my attention through a box set called New Directors from Japan (Third Window Films), I was wondering what he'd be doing next most out of the others that were featured. Some time passed and thanks to social media, I was able to find some of Watanabe's outlets to discover he had shot and was starring in yet another black and white feature, the serene looking 7 Days. Thanks to the man himself a couple of years later, I have had the honor of seeing this followup.

Set in the countryside, north of Tokyo, a man begins his morning routine, kicking off the fresh start of a week, according to the title that pops up. We see him preparing for work, brushing his teeth, and heading out the door. He carries some things down the road and drops them off in a fenced area. Proceeding on a long walk, he finds himself carrying along some beautiful fields to a cow farm, where he spends his day with the animals and a fellow coworker, whom we never get to know and only see walking across frame occasionally. Various machinery and activity based around the farm are presented to us in a slow, and even mundane fashion. He then finishes up his work day, heads home, to where we discover he lives with his grandmother (Watanabe's real, super adorable grandmother, Misao Hirayama). The two eat in silence as music plays in the background. The man ends his night resting in bed.

None of the things I mentioned in the previous, very descriptive paragraph, spoils anything about the film whatsoever. It is just a man who works 7 days a week, and spends his off hours eating with his grandmother, and resting. Rinse and repeat; nothing more, nothing less. The strength of this film liesin its mundane repetitions surprisingly. It goes through an entire week of this man's boring life, and we are placed as spectators in the view of this very normal working lifestyle, and it's actually really great. Sure, I will say most certainly not everybody will find this film enjoyable, and indeed boring, but for those who like observations on life, or those "slice of life" style movies, well... it doesn't get anymore real than this.

It is a very minimalist piece of work, so much so that the only dialogue that ever comes through is on the television at their house, as they listen to European opera, though it is incomprehensible to either of them, and to myself for that matter. On a rare moment, the grandmother does mumble something while they are eating, but I am not so sure she really said anything at all. It's this quietness that hooked me into this world. It reminded me of films of yesteryear, while also being modern in its influences. While I saw Ozu in the picture, I also was reminded of Weerasethakul, Tsai Ming-liang, and even Bela Tarr to some extent, though this isn't nihilistic whatsoever to my sensibilities (and hopefully to no one).

There is one particular moment that sort of summarizes the whole film for me, but I can't spoil it, as it was my favorite tidbit of the whole piece. I will say it involves the man and his grandmother, and it brought a smile to my face and wrapped up everything so nicely thematically. There shouldn't be much to say about this one honestly, as it sort of speaks for itself, without actually saying anything at all.

The beautiful black and white cinematography, from regular Watanabe collaborator Bang Woo-hyun, is striking and much more lush with its imagery than its predecessor. Every time he walked to and fro his house and work, I was mesmerized with the flowing fields surrounding him. The sound of the wind cutting across the plains and the unique score by his brother (also repetitious as there are only a few pieces that are played throughout) further the experience into something truly unique.

When I slapped a score for this up in my head initially, I thought to myself that it isn't something amazing, rather a nice little look into someone's life, but as time passed and I reflected upon it, the experience has been ingrained into me, and comes back to me quite regularly. I was wrong at first, and I believe this is a film that creeps up on you, much like the slow pace of its protagonist's life. It is a beautiful film inside and out, and for those willing to be patient, it becomes a very rich and rewarding experience in the end, and one whose subtle effectiveness you won't soon forget.