When Donnie Darko first came out in 2001, I was entranced. I was a fifteen year old, genre movie obsessed young man and this film spoke to me like Frank the Bunny did to Donnie. It’s a film that’s artistic, fun, insightful, and was perfectly timed for my generation of blooming cinephiles. It’s dark, but still off beat enough in its presence and well executed that it stuck with me through the last decade and a half. As an adult now, the film might be even better as the layers of its distinctively odd Twilight Zone inspired coming of age tale start to open up with repeated viewings and one can see just how weirdly detailed it is at embracing its premise. Fortunately, I’m not the only one that sees the appeal of its artistic and cult cinema blending as Arrow Video have dropped the quintessential release of the film. Those who were fans of the early Richard Kelly work, those new to the film, or those perhaps willing to overlook the strange Hot Topic powered hype that kick started well after the initial release of the film should definitely take another look at Donnie Darko in this latest release. Not only does it properly showcase the film as the piece of cinematic art it is, but it’s a release to impress those who may not even like it .

Donnie (Gyllenhaal) has been struggling with some things lately. He’s an outcast in his school and he’s working through some issues with a therapist. However, when he dodges death by plane engine from a random bout of sleep walking, he starts to think that perhaps things are on a path to a destiny he has yet to see. When a cryptic rabbit named Frank starts to show him things though, he may find that his destiny is to change what cannot be changed…

The reason that Donnie Darko remains as relevant now as it did when it was released is the fact that the film is expertly well rounded. You could label it a science fiction film, a coming of age drama, a dark comedy, or numerous other things and you wouldn’t be wrong. Donnie Darko is all of those things. Director/writer Richard Kelly, in his debut film, simply knocks it out of the park. The narrative structure needed to be fluid to be able to navigate all of the curves and pitfalls of each of the above listed genres and it ably does so here. It develops its story as a kind of mystery for the audience, allowing them to learn along with Donnie, about what is going on and still keeping things vague and efficient enough to remain a film open for interpretation from its audience. This balance between making a film that feels like it has purpose and one that can be analyzed from different standings is truly and artform and Donnie Darko nails it. Depending on which version you watch that is included in this set is the kind of detailed experience you will have. The director’s cut of the film, featuring almost a half hour of extra material, delves further into the layers and explanation of the time travel concept while the theatrical cut remains more vague and open to interpretation on what happens, particularly in the final act. I might prefer the theatrical cut for that reason, but having both versions opens up a lot of discussion about what the film is intending to say and that makes it a huge bonus for fans of the film.

It helps that, despite being a film with a decently small budget, it plays out like the big leagues in execution. Richard Kelly keeps things moving briskly for the entire film, the vague elements of its time travel spins and character focused writing being the core to its success, and he uses clever ways of building the film to get there. Having the film take place in 1988 is a strong indicator of such and it allows the film to use a lot of subtle political and pop culture elements to world build (the use of 80s pop music is some of the best uses of commercial songs in film that I’ve seen) while it gives the film the occasional “another time, another place” tone that feeds into the science fiction and fantasy elements that arise. These genre elements, as I mentioned before, give the film a Twilight Zone inspired approach where the twists may be fueled by reveals in the third act, but the centered focus on characters makes it work. Whether or not the time travel pieces are real, based on your reading of the film, it uses them in such a way that works for the characters to grow and give a strange foundation to its coming of age story. Characters that are expertly performed in both bigger than life and very subtle ways that only garner more favor on repeated viewings.

Granted, Donnie Darko is not a film for everyone and there are certain expectations that go with a film that garners this much hype even over a decade and a half later. It’s a film that moves from subtle drama, to surrealistic fantasy, to shocking dark comedy, and all the way back. If you’re not willing to buy into any one element then the film does tend to crumble, but if you’re willing to sit back and immerse yourself in the world of a teenager who thinks he may have stumbled onto the understanding of time travel all the while trying to balance out his life…then enjoy the brilliance of what Richard Kelly has for you here.

As mentioned before, this latest release for Donnie Darko by Arrow Video is the be all, end all of releases for it. It’s packed with all kinds of collector items, including the box set itself, post cards, and poster, while giving fans both cuts of the film and a slew of extras. Just look at the list below and don’t try and wet yourself. Things like twenty (20!) deleted and alternate scenes with commentary are enough to make most collectors drool, but that’s just the tip of the iceberg when it comes to digging into this box set. Truthfully, by the time this review is posted, I still won’t even be through half of what it has to offer as it’s that extensive. God bless Arrow Video as this is something like a holy grail for this film and its fans. 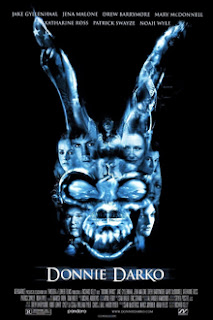 Written By Matt Reifschneider
Posted by DarkReif at 9:33 PM