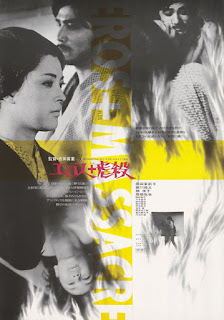 Almost immediately starting my journey with the director's cut of Eros + Massacre (still have yet to see the theatrical), I was taken aback by the language being projected. It's highly intelligent and offers a plethora of words spoken, and this being the first thing I highlight can tell you a bit about my experience overall. It's sort of highbrow in its thinking, without ever turning its nose up on its philosophies and continuing dialogue as it treads on.

The plot is about a woman and a man solving a murder, in a whodunit sort of procedural, though it sort of made me think of Rashomon towards the end by way of its seemingly endless approaches and interpretations, that juxtaposes two different periods of time. The time of the past, which is set in the 1920s, and now to the man and woman of the 60s, who are trying to piece all of this together.

The film style shifts between the two time periods, with the 20s being heavily focused on dialogue and while the shots are still highly stylized and uniquely framed, it seems to bring more of a concentration on its conversations between the various characters. You have a ton of betrayals and conspiracies mixed with a ton of philosophy on government and the rise of feminism, mixed with a sense of anarchy and aspiring to be a more pure and carefree being.

In addition to that period, it cuts back and forth periodically to the modern 60s setting, where the young man and woman are focusing back over the murder that took places all that time ago. This style seems to be more akin to the carefree nature and experimental attitude of cinema then, and it made me think of French new wave a lot. It sounds like a lot, and it is at times, but this complex narrative is masterfully weaved together into something ultimately fruitful and very rewarding by the end.

I'm not afraid to say that this film went above my means at times. There were multiple moments where admittedly the movie confused me and had me second guessing a lot of things, which intentional or not, leaning on the former more so I am sure, I actually was glad to be in such a state. It not only challenged me, but often stumped me at times. It is one I know I will have to watch again, and that excites me. It really is one of the smartest movies I've seen in a very long time, and I can't wait to dig back in and catch things I missed upon initial viewing.

I have mentioned the style quite a bit already, but I want to focus a bit more on it with the overall piece. The framing is jarring at times, often distorting your view and where you place your eyes. I can't really think of another movie that had my eyes bouncing all over the screen as consistently as this. I think some times though, this style gets in the way of the content at hand, and can even be poorly done. I get that it is intentional in its spirit and completely free of its censorship (shy of a blurring of female genitalia), but it seems that the framing wasn't as thought out as it could of been. Perhaps it was and I may be wrong, but I stand by this observation.

Eros + Massacre really is a heavy and dense piece of art. I didn't find it to be perfect, but it is incredibly ambitious and demands your attention. I was completely absorbed at times, and taken out of the experience at others. It impressed me more than the few tidbits that disappointed and the fact that it could stump me to such a degree, really does warrant this film repeat viewings in the near future. The crowd for this movie is definitely the arthouse side of cinema goers, and you know who you are. I really can't recommend this to someone who isn't into this type of film, but for those looking for something challenging, dive right in. There is a ton to explore and interpret. I only see it getting better with repeat viewings.