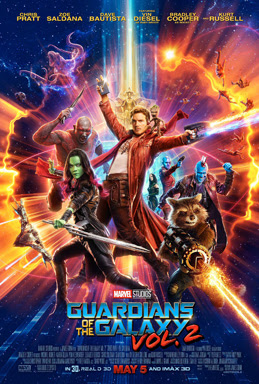 After the disappointing leap into the mystic and psychedelic realms of Marvel with last year’s uninspired (but still fun) run at Doctor Strange, it is a much needed boost for my moral for this shared cinematic universe to be returning to James Gunn’s Guardians of the Galaxy for Vol. 2. Initial reviews and reports seemed generally favorable, but with my sheer delight in the Ice Pirates-esque humor, heart, and spectacle of the film first film I was ready for whatever this film was going to throw at me. Truthfully, it throws A LOT at the audience too. Not only does this film attempt to rekindle the kind of action, drama, and silliness that made the first one a sleeper hit for Marvel, but it also goes by it in the classic blockbuster sequel approach: more is more. More jokes, more drama, more plots, and more characters. It even adds in more than that. It runs with the psychedelic nature that Doctor Strange used and gives it grounding, being bombastic in its designs and color schemes all the while delivering the fun movie that people want to see. The execution is not quite as efficient as the original Guardians was, but for a sequel that was attempting to find the same balance and figure out why the original one worked so well, Guardians of the Galaxy Vol. 2 is still a major Marvel success and one that pushes the franchise within the franchise into new territory while still retaining its core.

The now self-proclaimed Guardians of the Galaxy have been taking on ridiculous jobs to pay the bills. However, when they cross the Sovereign people with a silly mistake, they find themselves in desperate need of help…when in comes Ego (Russell) claiming to be Peter’s (Pratt) long lost father. However, is everything as it seems when the Guardians disagree on how to go about this new information or is it an elaborate trap set up by their now numerous enemies?

Guardians of the Galaxy Vol. 2 is just a fun movie. Once again, the banter and wit of the writing along with the cast as their colorful characters is what makes this movie work. For fans of the original, this is not going to change. The addition of some new characters, both as villains and heroes, adds even more color to the proceedings and each one is a layered character that plays into their own quirky, heartfelt, and often abrasive behavior towards one another. Increased screen time for characters like Yondu (played once again with screen stealing rough neck charm by Rooker) and Nebula can eat up some of the time needed to fully embrace the increased amount of plot lines, but they are charming enough to make sure that the audience is always have fun in some way, through dialogue, visuals, or comedic timing. Vol. 2 also sports perhaps the second-best villain of the Marvel Cinematic Universe and, while that isn’t much of a statement, it is a huge selling point in developing a film that’s layered enough to be one of the best that the MCU has to offer.

With the heart and comedic elements remaining intact, Vol. 2 does offer up some new martial worthy of mentioning. It further world builds by digging into other cultures and even, dare I say it, going into the psychedelic elements in concept and visually that made Doctor Strange unique. This film is impressive in its set, costume, and visual design. It’s not necessarily as trippy as say Strange was in its colorful and mystic approach, but because the film is already grounded to characters we care about and want to see more of it feels like a natural extension of the oddities of their adventures through space. The opining battle sequence against an interdimensional beast who eats batteries is almost iconic in its look and tone. Not to mention it features one of the greatest opening credit sequences I’ve seen in a film for a long time at this point. If there is anything that really partners with the fun and entertaining aspects of this franchise well, it’s this new more daring visual approach to the spectacle that makes this a film worth seeing in theaters.

Now, I did mention that Vol. 2 wasn’t as good as the original and for now all I have said so far is praise for the film. It deserves praise for being both a consumable Marvel product and something uniquely different from the rest. However, this film just isn’t as efficient and as smooth in its narrative as one would hope. For starters, the transitions between dramatic scenes, comedic scenes, and action scenes are not nearly as fluid as before. Some of them even feel a tad forced as subplots, like most of the Nebula/Gamora sequences that feel like they were tacked on to give both more screen time. Separating out the team after the opening act is good in theory and leads to some golden moments (Baby Groot’s search for the fin or Drax’s fun banter with Mantis are highlights of the film and only occur thanks to this narrative choice), but it seems to eat up run time when things could have been more even as the film plays out. As I mentioned, there is a lot for the audience to consume and it could have been a smoother ride in places to help them do so.

Yet, despite the flaws in its tone and writing flow, Guardians of the Galaxy Vol. 2 remains one of my favorite films in the Marvel Cinematic Universe. That’s because it still retains this sense of whimsical fun and world building without become a burden on its audience with unnecessary exposition. There are definitely a handful of surprises in store for fans in this film, along with some cliché ones that don’t benefit as much from the efficiency and balance as the original, and the films increased focus on visual energy and a strong villain make it a great way to kick off the blockbuster season. The film may have more detractors than the first in the end in ways of fans and critics, but color me ready for a lot more Guardians.

Written By Matt Reifschneider
Posted by DarkReif at 2:14 PM