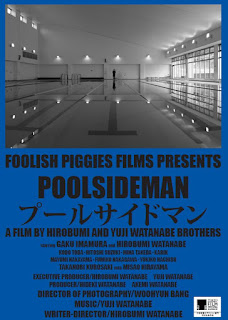 Continuing in the beautiful black and white cinematography that I believe Watanabe will do the entirety of his career with, which I am okay with 100 percent, Poolsideman blends the slow moving, observational elements of 7 Days and injects it with the black humor of And the Mudship Sails Away..., creating a film that seems to work to the strengths of the filmmaker, and is his best work thus far in my mind, though I put 7 Days right alongside it. Let me explain...

Gaku Imamura makes his acting debut as a man working at an inside pool building, in a city north of Tokyo, that seems to avoid all the chaos plaguing the rest of the world. This poolside man, spends every day working here, going through his very set routine, bored out of his mind, slowly crawling through the days. The film really makes a point of showing just how tedious and dull his daily life is. 7 Days uses this same method of the mundane to showcase the realness of life and captures time in the same way that someone like Tsai Ming-liang (Stray Dogs) does so well. It is absolutely slow, yet visually captivating and ultimately rewarding. Here, we really feel for the man's turtle-paced life, desperately wanting to see him break out and move on to better things, but he, like many others, is completely trapped in his own world, though he seems to be completely unaware of how easy it would be to just... leave.

The film gets a lot deeper than that, when we see that he never talks to his very, very chatty coworkers who speak a million words a minute on their breaks. He just sits there, like a bump on a log, antisocial, and even though they are at the same small table, somehow, he feels miles away from the company surrounding him. I don't want to delve to deeply on this, as really there isn't much to the film, in terms of things that happen. Again, the days are repeated, with subtle variations on the same repetitions. Another plot point, which I can focus on, is that one fine day another poolside man comes to our bored lead's place of employment, and he is played very hilariously by the director himself, Hirobumi Watanabe (7 Days).

I believe the most memorable parts of Poolsideman are when the two are chatting in their commutes to and from work. Our lead drives, saying nothing as usual, and occasionally lighting up a cigarette, while Hirobumi's character rattles random thoughts off the top of his head, and he is a big manga and anime nerd, providing some of the funniest monologues I've ever heard, including one where he says it is impossible to communicate with younger people, especially One Piece fans. I can't remember the dialogue to a tee, but it was absolutely hilarious. Still, the main character never once speaks.

The choice of no dialogue here has its purpose, though the reasoning here versus Watanabe's previous work, are for two totally different reasons. There is something bubbling under the surface, though what, I don't want to spoil. The character soaks himself in the most awful and disturbing news of the war and terror that is surrounding the world as we speak. It echoes and takes these real moments happening around us in real life, and throws them at you repeatedly throughout here, and is a sad reminder of just how dark our existence as a species is becoming. Again, I don't want to ruin anything, but the final act, and the last scene are really something powerful and will stick with you long after the credits roll.

Poolsideman started up, and I really thought it was just going to be a rehashed 7 Days, just at a pool building setting versus a farm life setting, but as it goes on it morphs into something totally different, and in ways a lot deeper. It is sort of blatant in its political showcasing, but it doesn't really take sides. I mean that the hero has his beliefs, though they are sort of open-ended to an extent, but it just chillingly provides a large barrage of vileness that people seem to have become desensitized to. It's sad, but a reality. This film ended up being far more interesting that I thought it would be, and is a total unseen gem. Such a shame that his works, aside from his debut, are practically nonexistent outside of Japan. Hoping some brave indie label comes along and snatches up Watanabe's works. He really needs to be known, and here's to hoping that just that very thing happens one day.