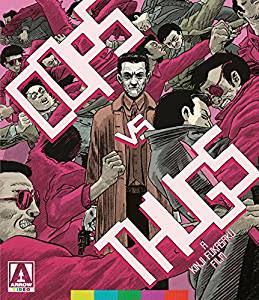 The 70s were about as prime as it gets for Kinji Fukasaku films. The man essentially could do no wrong. Whether it was his two stints of the Battles Without Honor and Humanity series (the second series called New Battles Without Honor and Humanity is getting a Blu Ray release here in the US in July and everyone and their dog should be very excited) or his various other stand-alone features, pretty much anything he did from this era is gold. This includes Cops Vs Thugs, a film he did in-between entries on the previously noted New Battles series. It was hard not to get my hopes up for this film going into it knowing that not only was it a Fukasaku film from this period, but it starred some of his regulars and was written by Kazuo Kasahara who penned the first four Battles films, and even with those hopes Cops Vs Thugs strikes out as another massively impressive film that dives into the complex humanity of law and crime. It’s a film that is both highly entertaining in an action oriented cops and robbers manner, but it also strikes a very effective chord about the gray areas of morality that being human straddles in a world that’s not nearly as black and white as it is made out to be. The results are another classic from an iconic director that needs a lot more love and a lot more attention.

Detective Kuno (Bunta Sugawara) has a complex relationship with the yakuza clans he investigates. He’s good friends with Hirotani (Hiroki Matsukata) for years and now he has become the leader of one of the gangs. When he helps his friend negotiate a land deal though, tensions heat up between two groups. This in turn makes the police bring in a new boss who is going to crack down on police/yakuza relations to bring them all to justice.

The title Cops Vs Thugs can be a bit of a sly way of describing this film. On the surface, it would indicate a police and yakuza clash, most likely physically, but also in a chess match against one another. The film certainly uses this as a main plotting point. The police, under the guidance of a new and very strict boss, are going to clean up the yakuza problems in the street with extreme prejudice. The yakuza, in the case of this film lead by Hirotani and played with intensity by Matsukata, push back while our main protagonist Kuno, also played with the usual intensity by Bunta Sugawara, is caught in the middle. The results are a film ripe with tension, exploding with Fukasaku’s brand of realistic grit, and punctuated with some very intense action set pieces. In this manner, while Cops Vs Thugs certainly feels right at home with the Battles Without Honor and Humanity series in tone and concept, this film is much easier to consume as it doesn’t feel nearly as dense and doesn’t use the documentary inspired approach. It’s quicker to develop characters and plot and moves with a brisk pacing that makes it a more entertaining and action oriented film. In this way, Cops Vs Thugs is still similar to his iconic Battles series, but stands out on its own as a much easier film to navigate.

Of course, Cops Vs Thugs as a title does indicate the more entertaining and straight forward aspects of the film. It also indicates the depth and intricacies of this relationship between criminals and the law. Instead of thinking of the title as a clash between two opposing sides, it also uses the term ‘vs’ with the intent of comparison too. Cops Vs Thugs, are they so different? Fukasaku regularly liked to take his crime films into a lot of morally gray territory and here he does so with an almost surgical precision. The protagonist of the film (did I mention Sugawara is amazing here? I did? I needs repeating) is a cop that treads the gray area between the seemingly black and white world of crime. He sees himself as morally competent despite indications of a completely botched marriage and generally helping out his friend on the yakuza side of things even when illegal. Fukasaku uses this as a hinge to power the entirety of the film’s subtext where almost none of the characters are right or wrong, but various shades of both as they navigate the complex world around them. Secondary characters easily fit into this focus and the ones that believe they are wholly right or wrong in their actions are usually the ones that are the most out of sync with the world that’s built in the film. It makes for complex and very humane characters for the audience to care about and as the film plays on, in an entertaining fashion as mentioned before, it resonates its deeper questions about its plot even stronger. By the time the third act rolls around, Cops Vs Thugs becomes a riveting spectacle powered by thoughtful writing, engaged direction, and powerhouse performances.

Of all of the great Japanese thrillers, action flicks, and cult cinema that Arrow Video has now given a new voice to in the last handful of years, it’s hard to deny that Cops Vs Thugs isn’t my favorite one. The release itself is stacked, another great visual essay by Tom Mes highlights Fukasaku’s career and remains my favorite feature on the disc, and the cleaned-up restoration does a film like this a massive amount of justice. A fan of the genre may not go wrong with any Fukasaku from this period, but Cops Vs Thugs may be his diamond in the sea of jewels, balancing the action thriller entertainment with his most efficient subtext on the morality of the concept yet. And this release only gets the highest of recommendations we have to offer. 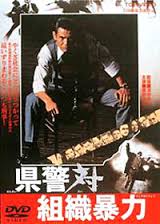 Written By Matt Reifschneider
Posted by DarkReif at 9:30 AM