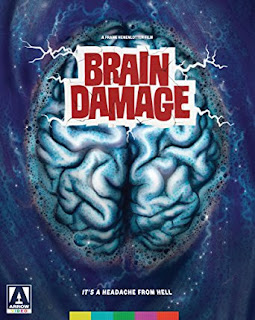 Memory is a tricky thing, particularly when it comes to nostalgia. Often enough, I refer to distorted memories of love or hate for anything artistic from someone’s youth as ‘nostalgia goggles’ and that for one to see a film (or whatever) properly, you need to see through your nostalgia goggles as it really is. This was my intent going into the latest Blu Ray release for the cult horror comedy Brain Damage. I haven’t seen the film since my mid-teens and I had very fond, if not foggy, memories of loving this film, but I didn’t want my nostalgia goggles distorting my review for the site of the film. On one hand, this intent made watching Brain Damage feel refreshing. On the other hand, it was also somewhat disappointing because the film, under a bit more scrutiny, doesn’t quite live up to those feelings I had of it from my youth. Brain Damage is a fun and often entertaining film, spun on its strange concept with some shocking visuals and offbeat humor, but it’s always one that plays things remarkably straight forward. A move that makes it easy to consume as a horror film, for those willing to look past some of its more grotesque gore and occasional shocks, but one that doesn’t resonate nearly as much as it had the potential to.

Brian (Herbst) hasn’t been feeling well lately. His brother (MacDonald) and girlfriend (Lowry) are concerned for his well-being as he acts stranger and stranger. That’s because Brian has a new friend. A new friend named Elmer (Zacherle, uncredited) and his friend is feeding him a drug that is taking him to new levels…and down a path where bloodshed maybe the only answer to breaking free.

Right away it’s obvious that the underlying commentary in Brain Damage is centered around the drug abuse fears of the 1980s. A young man discovers a partnership with a parasitic creature that supplies him with the mind-altering substances and we watch his life fall apart around him as he attempts to kick the habit as things spiral out of control. It’s not even much of a commentary or subtext really. It’s played right up front. I’m kind of shocked that the new tagline for this release isn’t something like, “This is your brain, Brian. This is your brain on Elmer.” The connection wouldn’t be more obvious than what’s in the film. This part of the film is not where my disappointment lies though, but it’s in the fact that Brain Damage hints as something slightly deeper and more psychologically disturbed. There are moments where it would seem the film wants to dive further into the addictive elements of its tale or how it emotionally impacts those around the addict. Hinting that Elmer may continually, in a longer existence, be more than a drug dealer, but truly the physical culmination of all of humanity’s darker layers. Power, greed, etc. Yet, the film often takes these hints and plays them off as punchlines rather than really letting it dig into what it could offer.

Truthfully though, that issue is a rather small one in the grander scheme of Brain Damage. This film is pure 80s, good, friendly violent fun and for those looking for just that, it delivers in spades. Director Henenlotter, perhaps best known for this film and the B-horror classic Basket Case, knows exactly what to deliver here when it comes to entertainment and in this sense Brain Damage does not disappoint. The humor is a bit more understated than I remember it being, but it hits at all the right times and the use of horror elements and intense moments of gore make this an instant classic. The use of the New York setting certainly adds to the strange grounded elements that anchor the more outrageous concepts down and the more serious tone only parallels that intent to balance out the dry, dark humor. The use of Zacherle as the voice of Elmer, the drug fueled parasite, is particularly inspired with his well-spoken and often soothing voice that goes against what one would expect from a creature like that. It’s these kinds of choices, tones, and approaches that make Brain Damage so much fun to watch.

As a bonus, this latest Blu Ray from Arrow Video is one that will sway even the more cynical cinephiles in the film’s direction. New commentaries, documentaries, interviews, and all kinds of goodies are packed onto this release (the full list is below) that fans will definitely want to consume. This is, of course, on top of the high def new release for the film that’s worth the upgrade already. Considering the fantastic visuals, psychedelic tones, and shocking special effects, this is the release of Brain Damage worth seeing.

It’s hard not to be slightly disappointed that Brain Damage didn’t go a bit further with its subtext and thematic elements as I was hoping it would, but it is still works as a fantastically fun 80s horror comedy. For what it is as a film focused on strange plot progressions, bursting moments of gore, and a slyly dry dark humor, Brain Damage is more than enough to satiate any kind of brain craving that fans of the era, director, or style are going to be looking for and this latest Blu Ray release is the one to devour. Sure, the film doesn’t dig quite deep enough for my tastes, but it still holds up remarkably well with or without the nostalgia goggles. A fear that not too many films can overcome. 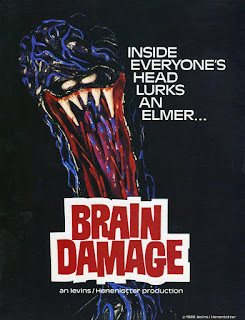