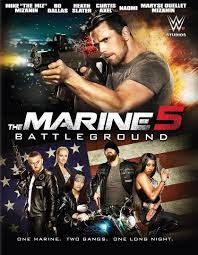 It’s been stated numerous times on this site how I feel about WWE Studios. I love what they are doing and where they are going with their set of films. They’re expanding their catalog, while at the same time delivering fun and highly entertaining straight to home video action flicks. Granted, the quality of these flicks does fluctuate drastically between franchises and lone wolf entries, but for those who enjoy low budget action flicks then they at least satiate a kind of B-movie craving. The spine of this development just so happens to be The Marine franchise. Starting as a theatrical film, it quickly moved to the home video release department and it hasn’t looked back since. This series has seen its ups and downs as it goes, scraping bottom with the third entry and The Miz’s first one as the new series lead, but the fifth entry just might be the best one yet. The Marine 5: Battleground is trimmed, fun, and sports a silly blend of action and thriller elements to be the highlight of the franchise. Yes, you read that correctly, the fifth film in a straight to home video action franchise from WWE is the best one yet. Weird, huh?

Jake Carter (The Miz) is just starting his career as a paramedic after the events of The Marine 4 and his stint as private security. His partner Zoe (Hooft) is running him through the ropes, but when they get a call to an underground parking structure by an amusement park in the middle of the night they  will stumble into a biker gang war. Now Jake must save a man wanted by a ruthless gang or die trying.

At this point, this series is just throwing shit around for fun. Jake Carter, as a character, is the military trained version of John McClane and is always at the wrong place at the wrong time. Considering this is the third film to feature the character though, he must have something going for him and I’ll be damned to say that I don’t enjoy watching him in various professions kicking ass. Even though his first film in the franchise is a massive misfire, the fourth one righted the wrongs with a decent director and a fun script. The Marine 5 takes it from there. It’s not like this film is giving him almost any back story or a huge character arc, in fact none of the characters in this film are given much of growth focus or any kind of a backstory, but he’s charming enough as a character and those who have seen the last two will have enough of an understanding to just run with it. It’s cheesy with how it makes him a paramedic this time around, but fitting and fun nonetheless. It really doesn’t matter though as long as he’s the do-gooder kicking baddie ass.

However, the true reason why The Marine 5 is the best of the franchise is director James Nunn. After seeing his work on Green Street Hooligans 3 (yes, there were three of those too), one could see his potential as an action director. His highlight film thus far might be last year’s Eliminators with Scott Adkins, but he handles the silliness of this film with a firm hand and delivers a nice balance of fun, serious dramatic beats, and outrageous action. He somehow even gets decent performances (albeit non-extensive ones) out of the various WWE stars that make up most of the secondary cast. His true brilliance comes in shooting most of the action which is done in an old-school manner. It’s not quite up to par with the brilliance of someone like Issac Florentine, but he’s quickly getting to be a name in the same echelon as the greats of the low budget action genre. He uses the minimal sets to the film’s benefit without being too mundane and repetitive and creates just enough fun moments to carry the sometimes overly serious plot.

The Marine 5 is not a great film as it has its fair share of eye rolling plot progressions, silly characters, and limited focus, but as a low budget actioner it takes what it has and gives a fun and entertaining experience to go with it. It has plenty of great little action set pieces, it uses its limited budget and sets to balance it out, and comes off as charming. For most cinephiles, this is not going to be the fun night with the movies one might want, but for those action junkies then The Marine 5 hits all of the right buttons and then some. Don’t think too hard about and enjoy it for its trimmed and efficient entertainment.

Here’s hoping that The Marine 6 comes sooner rather than later.