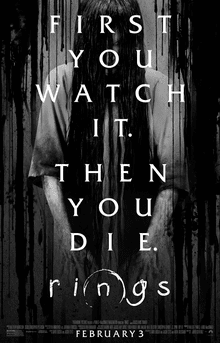 It’s no secret that here at Blood Brothers we love The Ring franchises. I even went so far as to write an article about why this series is still relevant late last year before the release of Rings and the Japanese crossover Sadako Vs. Kayoko. Now that Rings has finally gotten a US release, no thanks to the numerous delays and postponements it received, it was an easy decision to say that it was going to get a full review here on the site. Unfortunately, I’m not sure Rings deserves a full review. This third entry into the American Ring series suffers from the ultimate sin: having no potential. In particular, the film feels like it is meant to be a sequel that is not only meant to reboot the franchise, but one that is perfectly content with just rehashing EVERYTHING we’ve seen before. It thinks it’s clever with some of its modern spins and new mysteries to solve, but it’s all been done before in this franchise in one way or another and for fans that have seen all of them, it’s even less inspired.

Julia’s (Lutz) boyfriend Holt (Roe) is off to college without her as a family problem keeps her at home. When Holt mysteriously disappears with a cryptic message left for her by Skye (Teegarden), she heads to his college to meet with his professor Gabriel (Galecki) to investigate. As it turns out, Samara’s cursed video tape is being spread around campus and in an effort to save her boyfriend Julia is going to have to uncover a deeper mystery about Samara and her family.

As you can imagine, Rings really does not want to stray from the well-trodden path for this franchise. It’s also horrifically afraid that its audience was not going to remember the previous two American Ring films and so it tries, again, to re-explain EVERYTHING for them. The opening sequence, while interesting in concept as Samara comes for her latest victim onboard an large plane, only exists to give the audience exposition about the curse and how it goes about killing its victims. That’s it. It serves no other purpose than a cool intro and explanation and even then it’s very obvious that’s why it exists and it makes for a rough start for the film.

From there, Rings simply goes by the numbers. Despite some interesting visuals from director F. Javier Gutierrez at times, Rings is about as uninteresting in its writing as possible. Our lead characters are horrifically cliché and boring, as the film refuses to build them even when given the chance. A potential parallel to the devotion of family from Julia and the secrets of the family she must uncover around Samara isn’t used at all. The rest of the secondary characters, and a fun cast that includes Galecki and D’Onofrio, are wasted away in clichés. There is even a fun little idea built into the script about an experiment with Samara’s cursed video that is meant to modernize the idea of the message of the video that, once again, is not utilized at all outside of a few moments. The Japanese reboot series called Sadako uses the idea of a digital copy of the video is much greatest effect and those movies are hit or miss too. So even in the first act, there might have been some interesting ideas used, but Rings has no intent in moving beyond the predictable here.

That leaves two acts left in the film where it just goes through the motions. Our leads have to go investigate clues about Samara’s life, they uncover some new information, solve the mystery, and go on their merry way…to a not so surprising twist ending that’s less of a twist and just more rehashed sentiments. There are moments where F. Javier Gutierrez tries to save things with some fun visuals and moments where the atmosphere works, but the script is so asinine even trying something new or fresh feeling that it undermines the entire experience. Even for fans of any of the Ring franchises, let alone all of them, Rings just feels lazy and uninspired which results in it being one of the worst that I’ve seen.

Don’t underestimate this series though, it still has potential to be awesome in the future and if you’re looking for a better representation of it trying something new then I suggest seeing Sadako vs. Kayoko instead (it’s exclusively playing on Shudder currently, but it’s worth the watch for a quirky fun time). Rings just happens to be a film that suffers from a lacking imagination and a boring adherence to the formula that makes it an eye-rolling experience at best. I wouldn’t be shocked if we got at least one more in the US, even if it’s straight to home video or something, because Rings pulled in over $83 million dollars in box office revenue on a budget of $25 million.

Even with how disappointing Rings is, I sincerely doubt this is the last we see of Samara. Let’s just hope they attempt something a bit more inspired next time.

Written By Matt Reifschneider
Posted by DarkReif at 9:27 AM