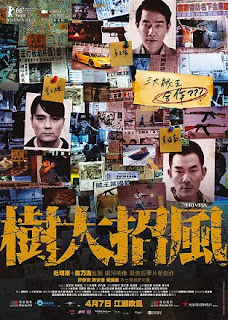 Trivisa stirred some pots when it first came out, thanks to its throwback style to older Hong Kong dramatic thrillers, but when it won the Hong Kong Film Award for best picture last year it solidified itself as a near instant classic that is being hailed as a forerunner for a second golden age of Hong Kong cinema. While the domineering force of Mainland Chinese cinema and its powerful focus on spectacle and entertainment makes me hesitant to say that Hong Kong is going to mark itself as a force to be reckoned with yet, it’s easy to see why people would think that when watching Trivisa. This film is good enough to almost convince me that the HK industry is on the brink of something grand too. Particularly because of the young directors involved with the film. While it’s not the action film that most people tend to think about when they think classic Hong Kong film, it’s a throw back film to the era of dramatic gangster thrillers that solidified the careers of John Woo, Ringo Lam, and Johnnie To in the late 80s and early 90s. Quite frankly, it’s a film that deserves to be mentioned with the likes of those iconic names and for those looking for redemption in the modern landscape of Hong Kong cinema then yes, Trivisa just might be the beacon for a movement to do just that.

As the handover of Hong Kong to the Chinese government looms, three various criminals find themselves struggling with their place in a world that is quickly changing and a future that doesn’t seem quite so bright. When rumors reach each of them that they are working together to pull off the biggest crime that Hong Kong has ever seen, each one starts to think that this plan might not be as silly and bloated as it would seem.

The reason why Trivisa works so well is that the film is character driven first and foremost. The plot, which seems robust initially as our three protagonists deal with their own plots and then start to formulate a plan to work with one another, is not nearly as detailed and expansive as one would think. Instead, the film drives home with the three characters and the surrounding secondary roles as a dramatic piece of cinema. The performances are stunning, often in subtle ways, and the film uses its heavy atmosphere to power its character focused writing and deliver a film that makes an audience care for three sets of characters and circumstances that don’t deserve our care. The film rarely moves too deeply into action or thriller territory, outside of the existential sense of loss that the three lead characters are dealing with, but it remains wholly entertaining and engaging with its audience and it picks up nicely when needed for some punctuated moments of intensity. It’s a slow burn flick, but it’s so fully realized and executed that not once did it feel dragging or elongated for the sake of artistic or entertaining merit.

Which does bring up one of the impressively executed quirks of Trivisa, directors Frank Hui, Jevons Au, and Vicky Wong all each take one character’s story as their own, using a kind of anthology inspired approach to telling each perspective and individual story as they weave together, but their focus and vision is so perfectly in tone with one another that it doesn’t feel like three directors. Surely, some of this cohesiveness is inspired by the guiding hand of producer Johnnie To, but had I not known it was three directors working on three stories that are intertwined I would have sworn it was one vision that replicates the Johnnie To sense of subtle, atmospheric artfulness to the gritty and occasionally violent world of criminals in Hong Kong. The film is so effective in its narrative flow and cohesive jumps between stories that it’s very easy to want to see when the three characters finally come together in the third act – although even that moment is as shockingly well executed and interestingly dynamic as the rest of the film without falling into cliché tropes.

I may be skeptical of the claims of a new Hong Kong cinema golden age that are being thrown around currently, but after seeing Trivisa it’s hard not to buy into that hype. This is a film that is immaculate in its delivery and intricately layered in its writing and performances that immediately one is absorbed into its rather trim plotting and concept. It’s a film that finds a lot of room to be effective without being over the top or gimmicky despite its core idea. Trivisa truly is an instant modern classic and one that any Hong Kong cinema fan will want to consume as soon as possible.