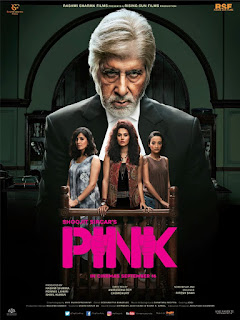 I went in to Pink with reserved expectations. I knew it was a film that would be serious and I had heard very high praise for Amitabh's performance as the lawyer working with the three young women involved in a violent incident. That being said, Indian cinema is something I am still new to and I think the number of good and great films that aren't goofy Bollywood affair coming from the region are new to the movie goers there. That aside, Pink is one powerful film and will without a doubt make it into my Top 10 of the Year list for 2016!

First off, just watch the trailer for the film. If that doesn't have you sold than nothing will. I also want to just point out and continue the flood of praise for Mr. Bachchan... brilliant! The man is a phenomenal performer, and his subtlety and reservation is so controlled and when he speaks (mixing his domestic language with English), you perk up and listen. A commanding voice not to be reckoned with. Once he suits up in his attorney gear, you know things are about to go down. Juxtapose that to his softer and even more pained side of grieving with his dying wife, and despite his creep factor early on (he wears a breathing mask and keeps eyes on the girls), you learn to really feel for and even care about this man. 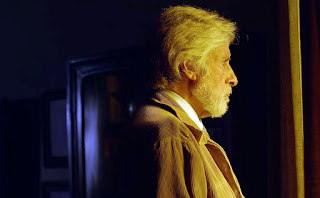 The three women involved in the incident (which the whole case is over) are all very well acted out. I had heard some complaints with Andrea Tariang's acting, but I think she nailed her character. I have known women (and men for that matter) like that: that won't speak out no matter what. Not out of not caring, just in their nature; to keep quiet, no matter the consequence, but I digress. Again, all do exceptionally well in the acting department, and Taapsee brought tears to my eyes numerous times. Truly a heart wrenching story.

I can't think of too many complaints with this one, save for how overly evil Angad's character is. Clearly, you are made to dislike the guy and eventually hate him, but his sliminess seemed a bit overdone at times, which leads me to my next complaint, that overdone trait he has sort of is lightly brushed on the entire. The message is a bit heavy-handed at times and occasionally beats you over the head with it. No means no. . . BUT... that said, it is incredibly powerful, and indeed, a message that needs to be heard, not only in India, but globally. If a female says no, no matter the situation, no matter the relationship, that's that. This is in by no ways spoilery. It is all over the film and it's adverts. Must say, I wholeheartedly agree.

Aside from the preachy aspect getting a bit heavy at times, I can say without a doubt that Pink is one of this year's absolute best films. If nothing else, see it from Amitabh's brilliant and powerful performance alone.

Email ThisBlogThis!Share to TwitterShare to FacebookShare to Pinterest
Labels: best of the year, Drama, India