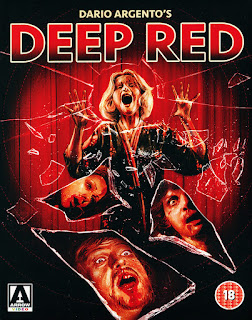 A couple months ago, it was brought to our attention that despite our continued efforts to cover cult cinema – and my own personal quest to dig into more giallo this year,  that we have not given Dario Argento nearly enough love on this site. Low and behold, this sentiment is true and looking at the various coverage we have developed we have not given Mr. Argento nearly enough coverage. For cult cinephiles, this is probably not an issue because his work is widely known and his innovations as a director in the 70s and 80s have made him one of the cornerstones of genre film making. However, upon request, let’s take a look back at some of his films. For starters, I decided it was high time to go back and revisit one of my favorite Argento films, Deep Red. While Argento would be known for a lot of various things throughout his career, Deep Red is perhaps one of his strongest and most cohesive pictures. At its foundations, Deep Red works as a murder mystery, but it’s the director’s style and often nightmarish moments that define the film and give it a narrative life worthy of much of the praise it has received decades down the road. Deep Red is a tight and effective film that balances a lot of smaller pieces into a much bigger film whose whole is greater than its parts.

Marcus (Hemmings) does his best as a teacher of music, trying to bring the best out of his students and colleagues both as people and musicians. One night, while on his way home though, he says a ghastly sight: a woman is murdered by a gloved killer in her window and when he rushes to help her, he becomes involved in a twisted case that is bound to leave more bodies in its wake. Can he unravel the mystery when no one else wants to find an answer and when he could possibly be next on the killer’s list?

A big part of the charm and success that has allowed Deep Red to be as impactful now as it was in the 70s is that the film loves to make its audience think the structure is twisting and turning without really pulling too many punches. Thanks to the narrative flow, Deep Red feels much more dense and twisty than it really is. The core of the film is your basic murder mystery and one that is par for the course in the giallo genre. An amateur non-detective becomes involved in a series of murders from a mystery assailant and drives forward to uncover who they are before more people end up dead. It has a basic romantic subplot that works much better than it should considering how forced it seems initially, a bit of fun with the police, and the film runs itself at an even pacing for the character arcs of its main protagonists. This isn’t rocket science, folks. In many ways, once the reveal in the final act has been unveiled, it feels numbing to think that it was so blatantly obvious to begin with for its plotting. However, that’s how Argento works. He can take substandard scripts (or in this case, a decent one that actually retains a sensible flow, but still that can be occasionally too predictable) and he makes if feel more intense and shocking than it actually is. The road might be one that’s well-worn for its viewers, but when you have Argento behind the wheel than the ride through becomes a whole hell of a lot more entertaining and thrilling.

Dario Argento pulls this off because he has a knack for detail and visual spice that drives home the tones and atmosphere – even when the plotting can take some odd turns or, in this case, some predictable ones. While the plotting and characters might be some of the more effective ones that Argento has used in his career, the film tends to be remembered for its kills and visual flourishes. Repeated visual cues of childhood objects likes dolls, drawings, and other toys mark a part of the themes and style that make the film so effective. Even when Deep Red starts off on an odd foot, introducing the concept of telepathy that kicks off the entire series of murders but never comes back as a part of the narrative again, he makes it work as if though it is a completely natural aspect of how the film unfolds. He does this again and again to make sequences memorable and creepy – even if they don’t make sense. An entire death scene where a man is distracted by a large mechanical doll which comes running out of his office curtains really doesn’t make sense, but it’s so effective in its scares and style that the audience simply adheres to the narrative punch and thematic meaning of it that they never really question ‘why’ when it works. This “style over substance” stance by the director has always been one of his calling cards, but the brutal and layered style that he coats on Deep Red might be some of his most effective at smoothing out the films bumps and oddities.

When it comes to Dario Argento and his horror masterpieces of the era, it’s hard to deny just who impressively well that Deep Red works. It’s not perfect, but it’s cohesive and smart enough in its stylish execution that many of the imperfections work in the films benefit as the smaller details build into a grander sense of storytelling whole. It’s brutal in its horror slashing kills, thematic in its attempts at building a mystery for our protagonist to solve, it has a throttling bass heavy and punctuated score by Goblin, and the characters are worthy of navigating this giallo world with for the duration of the film. There is a reason that this film has survived the decades of time that has passed and only shown a bit of its age. It’s because the whole is most certainly larger than the pieces and it’s slathered in enough style that it remains one of Argento’s best efforts. Many horror fans already know this, but Deep Red is a classic is well deserving of its praise. It gets massive recommendations from us.

Written By Matt Reifschneider
Posted by DarkReif at 10:09 AM