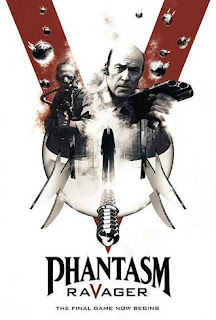 At this point, I feel like I’ve lost all sense of time when it came to Phantasm V. It was almost like living in the nightmare logic of the film series as the fifth entry had been rumored for what seemed to be eternity with promises and whispers on the wind that it was coming. Truthfully, I had resigned myself that this film would remain as rumors and never come to light. Even when the first trailer dropped a little while ago, I was almost hesitant to get my hopes up until I saw the film for myself. Now that Phantasm V is released, under the title Phantasm: Ravager, I’m kind of glad I never really got my expectations up for it. While this horror film series has almost always been a part my favorite ones, this fifth entry is…well, it’s kind of shitty. As a longtime fan, this latest picture feels more or less along the lines of a fan film versus one that officially sits as part of the Phantasm canon and it’s horrendously low budget and messy narrative hurts it exponentially as a film that could sit on its own. For those long time fans, there are some bits and pieces in the film that will make them smile, but the rest of it just feels like a mess and it can’t even use the series’ nightmare logic to overcome its issues.

Reggie (Bannister) cannot stop. He will continually wander this planet in search of his friends Mike (Baldwin) and Jody (Thornbury). He will do so until he finds them or he destroys the Tall Man (Scrimm). When his world of uncertain villains and a never ending killer spheres is thrown into question by a new shift in his reality, he will have to figure out if the present, past, or future is the real one and how to proceed from there.

It should be stated up front though that I really do want to enjoy Ravager. Truly, I do. There are a lot of fun ideas buried in the film. The use of nightmare logic in this one is rather intriguing as it blends memories, dimensions, and time to create the ungrounded atmosphere that the series was known for and in many ways it’s ambitious. When the film jumps to an older Reggie in an old folk’s home being visited by Mike who seems to indicate that much of what the audience is being shown is a combination of memories, fantasy, and paranoia from Reggie, it gives the film that uniquely off beat and surrealistic Phantasm twist. However, the film is never able to fully grab onto the ambitious reality blurring concept as the narrative leaps between what amounts to three different “timelines” that feature Reggie trying to survive and put the pieces together. What happens instead is that Ravager becomes a mess. Its narrative leaps don’t feel altogether connected, there is little threading to embrace the blurred lines of the stories, and most of the stories that feature Reggie on the road and Reggie in a post-apocalyptic future feels like rehashed ‘greatest hits’ moments from the previous entries of the franchise. At times, the wink-wink attitude to give the audience these Phantasm moments just falters and reminds us of what the series has used as gimmicks, characters, and style but in a much more effective way in previous entries. Instead of playing out as an homage to the past, it just made me want to watch the previous entries to remind myself of when the style and approach worked. So it somewhat backfires on itself.

There are a lot of little pieces in Ravager that can be to blame for the ultimate failure that this film achieves as a sequel to one of the most beloved cult franchises in horror. As the only film in the series not directed by Don Coscarelli, it’s obvious at times that David Hartman wants to replicate the style of the film’s producer and co-writer, but lacks the chops and timing to sell the weird blend of black comedy, fantasy, and horror. There are comments and reviews that refer to him as Coscarelli-Lite, but even that kind of title would indicate that he could at least replicate the style successfully and that would be a stretch. It also doesn’t help that Hartman and company have absolutely NO BUDGET to work with in this entry. When the only production company credited on the film is Silver Sphere Productions (no kidding), then you know it was paid for out of pocket. The special effects are mediocre at best and the visual effects are low end fan production material here and it undermines a lot of the horror and visual presence that Ravager might have had otherwise. While I love the idea of giant, city destroying spheres of death, seeing them on the screen is not nearly as satisfying to my B-movie cravings as I was hoping they would be. Sure, there are moments of offbeat humor that hooked me like when one of the spheres randomly kills a horse on a farm, but they are so few and far between that it never seems worth it as the film continually spirals downward as it plays out.

In a way, I sincerely respect the film for its attempts at bringing another chapter of the Phantasm saga out for the fans. The whispers in the wind were proven true, but the end product is something that might remain rumor as many of the fans of the series attempt to forget and dismiss the film from the previous four entries. Ravager is made with a decent amount of heart, attempting to give the audience the pieces of the franchise they come to expect with a few surprise moments for them to laugh at while using the screen presence of Reggie and the Tall Man to seal the deal, but it’s a film that never finds its own footing. It stumbles around in a low budget haze of homages and ill crafted narrative spooling that feels scattered and unfocused. Fans of the series will probably still want to pick it up to complete their collection, but I sincerely hope that Conscarelli and Hartman either leave the series where it’s at or find a stronger creative streak to attempt their continuation of the franchise.

Written By Matt Reifschneider
Posted by DarkReif at 2:38 PM