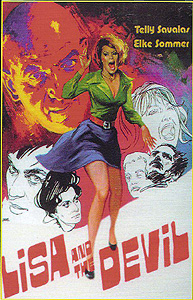 Throughout his career, Mario Bava tried his best to be diverse with his films even if he always brought his own unique flare to each one of them. It didn’t always work, but his attempts at branching out are appreciated from a fan’s perspective as it gives us some distinctive things to look at in his filmography. Of the more ‘classic’ horror films that he directed, Lisa and the Devil comes up as one of the hit or miss entries from fans depending on who you ask about it. Before seeing the film, I received a variety of opinions on the various versions (which will be touched on briefly below) and it would seem that it could be viewed anywhere between his best and his worst, given the various fan approaches to it. When the credits finally rolled on Lisa and the Devil though, I had to admit that I found it to be one of his best – an often too overlooked and misunderstood artistic and surrealistic horror film filled to the brim with approaches that leave it open to interpretation. It’s understandable why the film would generate such diverse reactions though, but for my money it’s a piece of Bava cinema that is just boiling with flashes of brilliance and an artistic approach that allows it to be seen in so many different ways.


Lisa (Sommer) has had the problematic issue of being separated from her tour group. Fortunately, she’s stumbled upon a rich gentleman, his wife, and their chauffer who are also having a bit of car trouble. Together they are invited into a villa run by a blind Countess and her son. Things are not what they  seem in this Spanish villa though and the only one that seems to know the truth is their odd butler (Sa, valas).

After the initial introduction to Lisa, as an American tourist in Spain, and a glimpse at a painting that features the devil carrying off the dead, Lisa and the Devil is quick to start layering in the levels of ‘un-realism’ into the mix and it can be a bit jarring for the audience. It does not necessarily take up the time to establish Lisa as a character (it does some of that as the narrative and plot pushes on, but even then she’s more or less an open character and purposefully so for the sake of the narrative) and this can be a problem for how the film plays out for an audience. There also isn’t a lot of time to set up the rules of the world that the film takes place in (although it’s assumed it’s the same world that you or I live in) and the film is already off to drive down its off beat Bava version of Alice in Wonderland. From there it does establish the other protagonists of the film, placing our titular Lisa into a Spanish soap opera of sorts, and then starts to build the classic murder mystery that Bava was so suited in crafting. If one looks at the film in a manner similar to Alice in Wonderland, then it begins to make sense. The film plays it light and loose with its ‘is this real’ or ‘is this fake’ quandaries as our main heroine is thrust into a world she does not understand and the film has no issues with playing out sequences in a dream like manner. There are many scenes that don’t necessarily make sense as characters and mannequins are switched in and out and the various secondary cast tries to convince the audience (and Lisa) that there is no conspiracy involved with the various murders/shocks that are being slowly delivered in the plot. It gives the film a dream like quality throughout that only gets more blurred and off center as the film goes. This is easily why Lisa and the Devil receives mixed reactions from fans as it really does not want things to feel ‘real’ or ‘unreal’ by the third act and goes for broke on its narrative atmosphere versus a plot that necessarily makes sense.

The reason that this dream like state works is that Bava is dedicated to details of the film and pushes it down some unusual paths. Lisa and the Devil is a film that deserves to be watched a multitude of times thanks to a flurry of hints and repeated themes that bounce throughout the film in small manners, including the use of dolls and mannequins to represent the characters, there are a lot of clever use of mirrors, and musical queues. Just watch as the sets of the house literally decay further and further as the film plays out in symbolic ways. Bava has always brought out an artistic touch to his horror films and in this film he might be at some of his most atmospherically artistic as he continually builds a world where those lines between reality and dream become further blurred as the plot is revealed. A criss cross of how a film should be structured in a classical sense.

This is, of course, partnered with some strong execution from a variety of sources. Bava as a director knows how to get the most out of a film visually and through the narrative, but he’s helped by some very impressive performances and a lot of great, clever (and often subtle) writing that benefits the overall tone and themes that the film is embracing. While Telly Savalas steals a lot of the scenes in the film with his ranged performance as the butler who strikes an alarming resemblance to the devil of the painting in the opening scene, the entire cast is on their A-game. Elke Sommer is given perhaps the hardest role of the film as Lisa who must remain something of a likable heroine deserving of the audiences’ attention without a lot of back story or character development which is necessary for the plot and narrative to work in the dream like manners needed. She does it admirably. The rest of the cast also works the magic of subtle character interactions and emotions without a lot of exposition and it helps the overall tone of the film in some effective ways.

Now, that being said, there is a different version of Lisa and the Devil that was released as The House of Exorcism and it’s substantially different. There are entire sequences (including the ending) of Lisa and the Devil that are edited out of the film and there are entire scenes that were shot separately to make the film into an Exorcist knock off. Stories go that Bava was so upset with the added sequences of nudity, profanity, and scares that he actually quit the film during these new shoots (which resulted from the commercial failure of Lisa and the Devil in Italy) and the film was finished by a different director. The Blu Ray release from Arrow Video features both films and The House of Exorcism is easily the inferior version of the film, hands down, as it lacks that artistic flow and dream like quality that made Lisa and the Devil one of my favorites from the director. Many of the new scenes make even less sense and they obviously feel filtered into the plot instead of progressing it as it bounces back and forth between "plots."

All in all, I found the artistic and non-traditional approach to Lisa and the Devil make it one of Bava’s best horror films. It’s not necessarily a film that makes sense, at least in the classical plot proven manner, but it’s a film that works with some very effective execution and a narrative first approach that levels out many of its scripting bumps. It’s dream like essence is one that will be open to interpretation for many of its viewers and I totally understand why people would dislike the film, but for me it’s the best selling point that this film has as a unique and fresh film from Mario Bava.

Also, just skip The House of Exorcism. It’s not really worth the time when the original is so much better.