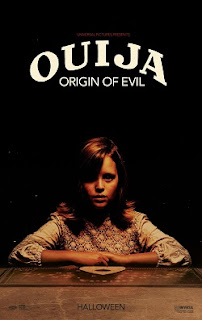 I disliked the original Ouija enough that I refused to even write a review for it. It was critically panned across the board (I made a funny!), but that didn’t stop the film from garnering some serious box office cash and getting a sequel green lit. Normally, I wouldn’t have given this sequel the time of day based on my opinion of the first one, but when Mike Flanagan’s name was attached to it the film leaped to the top of my list to see. Flanagan is one of the iconic directorial voices in modern horror, thanks to films like Absentia and Oculus, and his inclusion in this sequel made it one of the big question marks for the year. Strike that question mark out of the equation though because Ouija: Origin of Evil is not only superior to its predecessor, but it’s one of the more stylish horror films of the year. It’s a film that embraces its limited, mainstream structures and delivers enough Halloween scares to pull in audiences this October with pizzazz.

Alice (Reaser) has had a tough time raising her two daughters, particularly since it’s the 1960s and her husband isn’t around anymore. She gets by as a medium to the spirit world, although it’s all a trick and her daughters are both in on the scam to keep their family afloat. When Alice buys a Ouija board to add to their act, she unknowingly opens up a real door to the supernatural that will have her youngest daughter Doris (Wilson) under the influence of “others.”

One of the major issues that plagues many of the mainstream horror films that arrive as a wide release in theaters is that they try to appeal to a larger audience than just horror fans and that can lead to watered down scripts, generic scares, and uninspired rehashed ideas. In fact, that’s exactly how I would describe the original Ouija film. It was terrible and about as generic as a mainstream horror film can be. This sequel has the tough job of retaining that easily consumable structure of a widely released horror movie, but it has to elevate it to appease the critics that ripped the first one. Oddly enough, Flanagan and company actually pull it off. This does mean that the film is decently predictable in its plotting. It blends the popular haunted house genre with a bit of exorcism bits and it isn’t throwing a lot of twists and turns at the audience. This is easily one of the biggest obstacles that Ouija 2 has to overcome, especially for horror fans, because it has to keep things simple without making them boring. The scares can be easy to call and the main plot is not at all original. This is what one comes to expect with these kinds of horror films, so expect the basic structures and easily consumable plot here.

Yet, there are two reasons that Ouija 2 can overcome the simplicity of its plot and structure. Firstly, the film does the smart thing and really focuses on our protagonists as real characters instead of the generic teen trash that was in the first one. The family unit with their struggles and interactions may not be original, but they work in their sincerity. As the film continually spirals into darker and more supernatural territory, the audience actually cares about what happens to them in the outcome. With strong performances, realistic interactions, and a charming build this is one of the reasons why Ouija 2 works. The second is that Mike Flanagan blends an old school appeal with the modern elements to craft a film that’s visually stylish to maximize what narrative, tone, and atmosphere it does have. The 60s period setting is utilized nicely without requiring too much production cost and the film looks old. Seriously, it looks like its filmed on film (including having cigarette burns in the corner – a treat that many of the teens in the audience may not even know exists as a treat for older horror fans) and he uses zooms and camera shots that reflect the filming style of the period. Hell, even the title card is old school and it immediately had me hooked. Of course, Flanagan understands how to use atmosphere and scares and he nails a handful here for some delightful fear fun. He even throws in a few surrealistic Oculus moments where dreams and flashbacks bleed into the present time. Needless to say, I was hooked and impressed what how this film lifted itself.

In the end, Ouija: Origin of Evil is not necessarily going to blow away a ton of horror fanatics with its basic story and predictable structure, but I have to give Flanagan and company a hand. They salvaged this ship from sinking. Ouija 2 is loaded with style and just enough substance to make it a film that takes the formula and adds enough punch to make it one of the biggest surprises of the year.

At this point, I hope that they give more struggling horror franchises to directors with as much talent as Flanagan. Ouija: Origin of Evil is proof that even the worst series can be saved with the right intent and skill sets. This film comes with one of our biggest and most surprising recommendations.