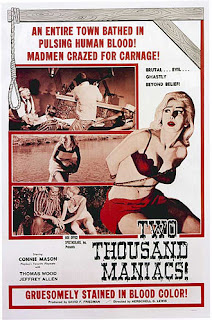 Going into this latest – and very expansive – box set about Herschell Gordon Lewis’ filmography, there was only one film I had seen of his previously and that is Two Thousand Maniacs!. It’s easily considered one of his best and it even warranted a remake in the form of 2001 Maniacs in 2005. On my second watch of the film I found that I enjoyed it a lot more than I initially did and that the exploitative horror film really does deserve the love as a simple and effective little flick. This is due to the fact that the film runs at a fairly effective (and fun) pacing, rarely holding up the movement of its narrative for much more than the next kill sequence or plot progression. It delivers on the kills, giving some uniquely “backwoods” kinds of sequences that intrigue in their creative spirit, but also unsettle the audience with the amount of ‘fun’ the villains of the film are having while our protagonists writhe and beg against the horrific things that happen. The film also pegs in a great little twist into the finale that adds a rather smart bend to the straight forward approach that it used for the rest of the film and sets itself aside.

However, Two Thousand Maniacs! is not perfect and the one major piece that it lacks is a truly effective pair of protagonists for the audience to connect to. Both Connie Mason and William Kerwin can work as relatable leads (see Blood Feast), but the film is more concerned with building up the plot and kill sequences that it generally leaves them as bland characters. It’s not until the second half that it really starts to give them the feel of real characters and by then it’s a bit too late. Otherwise, outside of some silly performances and cheap editing, Two Thousand Maniacs! is a massively entertaining and energetic film worthy of a lot of the praise it has been given. If the rest of this box set can match the manic tone of this, it will be a blast to work through. 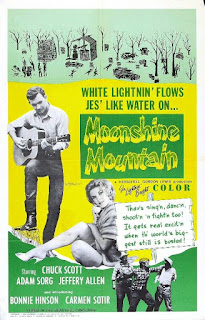 For the fourth film in this Feast box set, Moonshine Mountain is a change of pace from the other three films. Instead of a blood soaked horror flick or an exploitation drama, this one is a backwoods dramedy about a country singer who goes out to the rural country to find inspiration for some new material. The resulting film then struggles to find its footing for the first half as a musical/fish out of water flick and sort of falls into being a moonshine powered action thriller with crooked cops and back road justice in the second half. Neither part is all that interesting in the end, unfortunately.

Perhaps I’m just not all that familiar with the idea of a country, hillbilly drama comedy with action and suspense pieces, but Moonshine Mountain was a struggle for me to latch onto as a film. None of the characters, outside of a few fun smaller secondary roles, seemed at all that interesting and the stuttering narrative doesn’t quite seem to know where it’s going either resulting in a film that occasionally overstays its welcome. The film is made with a decent enough amount of energy, plugging in plenty of songs and just enough of Lewis’ horror pieces in the final act (that seemingly come out of nowhere honestly) to keep things just off beat enough, but Moonshine Mountain is not even close to being one of the better films in this set. There are certainly a sect of fans out there that will enjoy this for being a time capsule of the drive in era, but I highly doubt I will ever find myself digging into this one again.