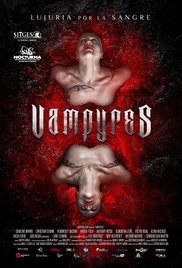 As I’ve said before in various reviews, I’m not inherently against remakes. Really, I’m not. In the case of many low budget or older films, there are ways to modernize or change a film without deterring from its core intentions and that breeds some creative material in many ways. Vampyres, a modern day Spanish remake of the 1974 exploitation cult film, had a lot of potential to raise the bar on the original and it was obvious that the director and producers had a lot of respect for the films of exploitation past – when one looks at all of the cameos from cult character actors that appear in this film. So it’s an unfortunate turn of events when this updated sensual vampire flick rarely embraces its own artistic hints and simply goes for the simple solution. For those looking for a film with gore and skin, it will certainly fit the minimum requirements of entertainment as a modern day exploitation film. For those hoping for a little bit more, i.e. me, Vampyres is a lackluster horror film with little outside of the basics to appease a growing appetite for better films in the exploitation arena.

Harriet (Polo) is with her friends and looking to spend a relaxing vacation camping out in the woods and getting back to their roots. However, two of their friends didn’t make it. Not only that, but there are two mysterious women in a local house nearby that are bringing home different men every night and it’s a bit suspicious. Could the two things be connected?

Let’s be honest with ourselves upfront when it comes to Vampyres and its cinematic peers though. It’s not like the exploitative spin of sensual feminine vampires produced some brilliant cult cinema throughout the decades of its existence. It certainly has brought forth some decent cult films that approach the subject in a variety of slightly more artistic ways than just skin and gore. In recent years, there seems to be something of a small revival of the genre with films like Kiss of the Damned and the remake of Embrace of the Vampire finding their way into mainstream releases so it’s not necessarily all that surprising that a remake of Vampyres would get a US release. Even then, many of the other modern spins on the genre or remakes tend to be more robust cinematic experiences than Vampyres. This latest adaption is something of a vague and flat film, lacking the narrative punch and artistic atmosphere to compete against some of the other modern vampire releases. The plotting is simple, almost going as far as to pander to the slasher formula of young folks camping in the woods, and the characters might even be simpler. The biggest issue that plagues the film is the lacking depth of anything that would represent logical human interactions. Characters make inane decisions, plot progression points are either forced or ignored for the sake of pummeling out the film in 89 minutes, and there is no chemistry on screen for either the protagonists or the antagonists. If anything, there needed to be an underlying tone of atmospheric infatuation between characters to make the sensuality make sense in the film and it’s not there. Even the two vampires seem to lack onscreen chemistry with one another and it makes the entire film fall flat. When there is no onscreen presence to be found in the film and the plot is muddled simplicity at best, this film exists to be nothing much more than the exploitation it’s pandered as and that’s massively disappointing.


Now, not all of Vampyres is bad. Director Victor Matellano desperately tries to make the most of his very limited budget by using all of the elements that his setting has to offer. Dark cryptic basements, lakes, and the wooded road all make for great settings for the film and it gives Vampyres the occasional realistic tone that grounds it. He also attempts to do a few artistic things visually using camera shots and strong gore effects to the benefit of the film to keep it entertaining enough for its short run time. There are certainly suggestions at a much more invested movie that are hinted at in the script, including some secondary characters that might have been better suited for the movie with a bit more development, and while the film doesn’t actually utilize most of these things… they are there.

It’s obvious that Matellano and company have a love for the original and try to keep this version of Vampyres true to the that vision. It retains that low budget dream like quality and balances it out with extensive gore and nudity to plant it firmly as a new age exploitation flick. Unfortunately, the film is not much more than that and it suffers from it. It is hindered by all the same issues that prevented the original from being considered a classic that rose above the genre and this one seems quite okay with doing the same. For fans, this will be a decent watch to pass some time however, as a remake, it doesn’t really add anything to make someone what to watch it over its predecessor.