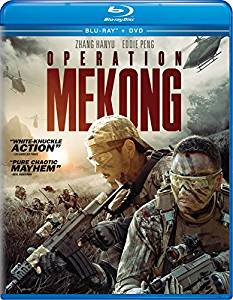 Many of the early trailers for Operation Mekong made the film look something like a military action thriller, powered by a dramatic ‘based on true events’ plot, and packed with big name stars throwing their best performances to earn awards. In many ways, yes, this is the film you are going to see with Operation Mekong. It’s certainly all of those things to an extent. However, that’s not all it is either. There was a certain expectation that went with the tone of the trailers that seemed to mix Platoon with a more modern day Lone Survivor spin and Operation Mekong is a bit more than that…and a bit less. Dante Lam’s latest action extravaganza is more John Woo and less Oliver Stone in its approach to the story, blending in high octane block buster action sequences with military dramatic touches. So it is less, in the idea of an impactful and emotional punch categories, but it is certainly more in the insane cheesy action categories. Operation Mekong ultimately comes off as a slightly mixed effort in its writing and characters, but it makes up for a lot of its larger flaws by being skull shattering action packed and tense. When it’s boiled down, this is really the film I should have expected and I still enjoyed the hell out of it, even if it doesn’t quite match the dramatic heights that Dante Lam has reached in previous films.

After a shipping vessel filled with Chinese workers is found with it’s crew slaughtered on the Mekong River for the drugs stashed on board, an international storm ignites where various countries decide to team up and fight the drug trade that has plagued the area. A special team is formed to go undercover and find one of the major drug lords of the area and topple his regime, but will the vicious drug lords of the region find out who they are and take them out before they have a chance to move?

On the core, Operation Mekong certainly uses a foundation like your average Hollywood ‘based on true events’ military flick. Pieces of the previously mentioned Lone Survivor, 13 Hours, and Zero Dark Thirty all can be found in the style and basic structure of the film. Dante Lam was already a director who took Hong Kong cinema and gave it a modern spin in previous films (reaching Michael Bay levels of silliness with The Viral Factor and even nailing the sports film with his MMA inspired Unbeatable) so he’s something of the perfect guy to attack the military action thriller. Stylistically speaking, it’s very much similar to those previously mentioned with lots of shaky cam and gritty visuals to go with it, but the real parallel comes in its layered and robust storytelling approach. This is a complex story that leaps through small bursts of time and around the area of operation with a rapid fire speed to cover all the necessary plot pieces and characters needed to tell the story. There are really two main characters in the film, played with realistic finesse by Zhang Hanyu and Eddie Peng, but it has an ensemble approach to its team members, slew of villains, and various upper levels of military management. This is both a blessing and curse for the film. Yes, it certainly gives Operation Mekong a layered and complex approach that transmits the depth of ‘real life complexity’ to the situation, but it also means that even our two main characters get very little time to develop deeper back stories. The film throws in a few pieces here and there to get the audience to connect with them, effectively might I add, as it uses loved ones and bits of artistic flash backs to do so and the performances are charming and strong enough to sell a lot of the secondary roles. It misses out on the emotional impact by having such a dense narrative to tell and not enough time to really do it. This is an issue with the style of the genre and it’s not unique to Operation Mekong. However, it’s still a bit disappointing to see this when Dante Lam has notoriously nailed many of his films that feature complex narratives and realistic characters. In a way, this means that the film is more or less par for the course in this aspect and it should appeal to many mainstream western audiences who are used to this kind of approach.


The military thriller core is just the main foundation of what Operation Mekong has to offer though. The other portion is the throwback Hong Kong actioner that the film slides into during its many, many action set pieces. This, of course, can be occasionally at odds with its more realistic military tones, but for this reviewer it adds a much more entertaining and exciting spin to events that keeps things moving at a very brisk pace. As I mentioned in the intro, the high octane big budget action gives the film a John Woo tone (always a win in my book) and it pushes its own boundaries by adding in the darker tones that the rest of the film uses. Massive mall shoot outs with undercover agents, a siege on a gambling den that plays out like a heist sequence, and the military assault finale all belong in action block buster territory. Dante Lam as a director knows how to make modern action sequences a spectacle without being messy or too visually chaotic and it works in the film’s favor here. Sometimes it’s a bit cheesy (there is a car chase sequence with a rocket launcher, just saying), but it’s also so effective and big that it made my face hurt from smiling so much. This is expertly executed action glory to balance out the realistic thriller tones of the rest of the film.

Operation Mekong is hardly perfect with its overly dense plotting and tone shifts, but the characters are still fascinating to watch, the action is prime Hong Kong entertainment material, and it’s a tense and swift film that had me on the end of my seat for the full two hours it played. It’s not quite up to the level of some previous Dante Lam actioners or thrillers, but it’s still a film that showcases why he’s one of the best that the industry has to offer right now for Hollywood style films that can’t be overlooked. More or less, Operation Mekong is for action fans more than military thriller fans, but either way it gets a huge recommendation for its screen eating abilities and boot-to-the-throat action sequences.