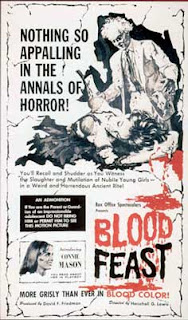 As a film that essentially kicked off the entire "splatter film" movement for horror films and cult cinema, Blood Feast is definitely ahead of the curve. It uses its crisp color schemes and bright red blood drenched death sequences to surprising effect to pop right off of the screen. It's ambitious for its budget, made with a strong sense of heart, and it occasionally goes artsy enough to sell itself as a piece of cinema that isn't completely in on its own gimmick. This last piece includes the infamous tongue sequence that is preceded by a longer set of soundless takes to set up the tension. The film is a tight one as it spends very little time really building up many of the characters and instead focuses on moving the plot along in a speedy and efficient manner. In many ways, the structure and tone of scenes would seem to be heavily pulled from the styles and structures of classic Universal Monster films, although Blood Feast only sparks some semblance to The Mummy at times with its actual plotting and modernizes things beyond that. The film, in the end, was much more effective than I expected going into it. 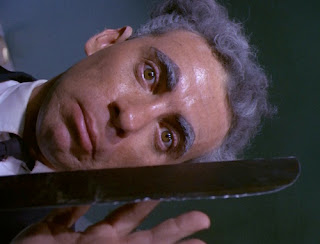 Truthfully, the acting can be horrendously hit or miss and the narrative flow is staggered a bit too much from a director that was finding his voice. The editing can be a bit off-putting and the conveniences the plot takes to keep up the pacing can be occasionally eye rolling so keep that in mind when going into the film. However, the 'out of the box' thinking of its spin on the murder mystery and genuine intent for the film cannot be overlooked. Blood Feast is a film with rough edges, but when it works it's a splendidly campy good time with just enough thoughtfulness that shines through to make it resonate. Not to mention, the version available on this latest Arrow Video release is a pretty stunning new restoration that brings out some of the best elements that the film has to offer visually. 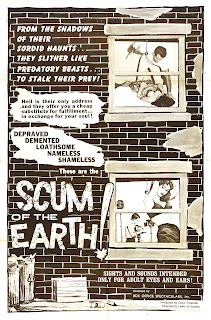 Released the same year as the fun and quirky Blood Feast, Scum of the Earth! is a film that struggles to find the one key component to sell its story: the tension. Instead of a splatter film that Herschell Gordon Lewis was known for later in his career, Scum is a film that features a weighty and dramatic tale of a young woman coerced into a pornography ring and the various characters involved with her nightmarish decent. While the story seems simple enough and one that might be featured on television now in a show like Law & Order: SVU, Scum goes to take the exploitative elements of its concept and give it a sad and dramatic undertone. Think of it as a film that aims for the Jack Hill approach to exploitative filming, but Lewis is not nearly as talented as a director or writer to pull it off. 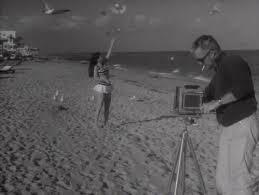 This leads to the overall approach and tone that can be a bit scattered. For a film that’s dependent on the audience to connect with the characters and the gray areas that they exist in, the acting and the editing can undermine a lot of the flow and tension needed to build in the film. There are moments, William Kerwin as the camera man Harmon shines here in the film and gets many of the key pivots of the script right, but overall it falters in being nearly as interesting or as effective as it potentially could have. When compared to Blood Feast, Scum does showcase the diversity of Lewis as an exploitative film maker in his earlier career, but this film lacks the budget and tight execution needed to elevate its concept to the next level. It’s ambitious and respectable there, but it’s hardly as good as it could have potentially been.