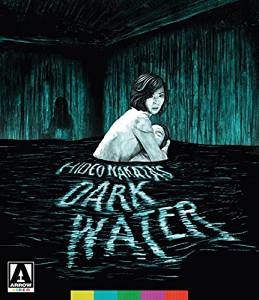 Ghost stories have always played a large part of the Japanese cinematic world and the boom of the J-Horror craze in the late 90s and early 00s was only one of the more recent examples of its popularity. A big part of the explosive rise of the genre was director Hideo Nakata and his Ring films which launched an endless tide of modern Japanese ghost stories and some mixed Hollywood remakes alike. However, one of the best J-Horror films to come out of this wave was Nakata’s return to the genre, Dark Water. The weird need for American audiences to be ‘scared’ by horror films means that Dark Water is a film that gets massively overlooked due to its more dramatic narrative and slower pacing, even if it was remade just a couple of years after its release by Hollywood. This ghost story not meant to be as unnerving as Ring or as dreadfully suffocating as Ju-On, but it’s a film that really works a magical system of layering symbolic pieces into a more traditional Japanese ghost story. Dark Water may not have a ton of jump scares a lot of unique gimmicks to its name, but it’s easily one of the most emotionally effective and thoughtful horror films to arrive in the last 20 years – which is why this latest Arrow Video release is a grand reminder of a film that too many horror fans are missing out on.

Yoshimi (Hitmomi Kuroki) is going through a vicious divorce and trying very hard to gain custody of her six year old daughter, Ikuko (Rio Kanno). This means rejoining the work force after she left to have her child, going through the lawyer circus for a husband intent on painting her as an unfit person, handling her own insecurities as a mother since her own abandoned her, and finding a new place to live. This last one proves to be the decision that will haunt her forever as their new apartment complex sports some odd water damage that won’t seemingly go away and a little girl in a yellow raincoat that’s become attached to her daughter.

On the surface level, Dark Water isn’t going to be making waves when it comes to J-Horror. This film is one that retains a lot of the same imagery and core concepts that Nakata used in his Ring films with a small ghost girl who is perpetually dripping wet, a mother and child bond, and a plethora of moments where the subtle character building is more defined by the symbolic imagery and settings than it is by actual exposition. This time around Nakata and team very much adhere to a more classical structure for the film, although as one will notice how the third act is divided (giving it more of a four act structure) that even that is not maintained in its entirety, and it allows the film to really pace itself and deliver more layers to the audience without seeming too vague and unattached. In a way, this does make the film fairly predictable for those who are experienced in J-Horror. Yes, this little ghost girl will terrorize the mother and yes, the mother will attempt to figure out what happened to her. So don’t go into the film expecting anything too drastically different and fresh and you will have the right expectations to dig into the rest of what Dark Water has to offer.

This rather streamlined approach to the storytelling aspects allows Dark Water to take its narrative and detailing deeper into the depths of the characters than many of the J-Horror films that were popping up at the time. As I mentioned, in the opening paragraph that Dark Water isn’t very scary, at least in jump scares, but the film is decently creepy and unsettling in how it uses real world issues and then makes the supernatural elements a “dark reflection” of those. At times, it’s the parallels between the cyclical nature of abandonment, the loss of a family member, and the running theme of motherly sacrifices (in a Japanese culture where feminine roles are limited)  makes this film a much more robust viewing experience than just the horror story on its surface. Just look at all the uses and meanings of water that are used in the film. Don’t get me wrong, Nakata nails some of the creepy visuals (the scene where we see the ghost girl’s sopping wet feet and the water pours off of them, for example) and he takes his time building some breath holding tension, but the true reason that Dark Water is so good is how it is all balanced and how all of the symbolism and plotting is connected. This is what makes this film one of the best that the genre has to offer.

Dark Water is just one of those films that with time has been horrifically overlooked by the masses. Outside of the bigger franchises in J-Horror, films like this were overlooked as knock offs or cash ins when really this is easily one of the most dramatically effective ones of the lot. Watching the new interviews with the various artistic minds behind the film on this release only punctuates how effective and thoughtful this film was in its execution and it’s a blessing that it will hopefully find a new audience via this Arrow Video re-release. Dark Water is a film that every horror fan should take a second look at and this is the perfect release to do it with. This gets our highest recommendation.