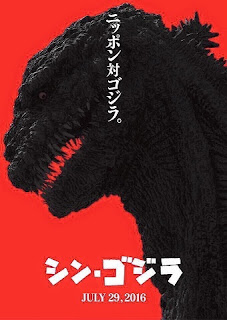 After Godzilla got the American reboot a couple of years ago, it stirred notions in the water that Toho was interested in trying to bring the Big G back for their own franchise. This, of course, causes both excitement and panic in the fan base and there seemed to be as much hesitation as their was blind faith in the project from fans. While the newest American film has garnered its own share of mixed feelings (you can read my positive position on the film HERE) there were enough rumors and speculation about what the film would be that it was easy to lose sight that we were getting a new goddamn Toho Godzilla film. Even better? After its release in Japan to some solid critical acclaim and box office numbers, it was purchased by Funimation for distribution in the US and it would even get a limited theatrical run. Not only were we getting a new Godzilla film, but it was getting a release in the United States. After seeing the aptly titled Shin Godzilla (bless Funimation for going with this title instead of Godzilla: Resurgence which wouldn’t make sense at all in the film), it’s easy to see why it’s making such a huge mark in Japan. This is not only a fantastically executed rebirth for the character and franchise, it’s one that knows its roots and homages the original in so many effective ways while maintaining its own style and approach. Shin Godzilla is the best of both worlds and it comes as a spectacular surprise.

It starts as a spot in the ocean. When an underwater roadway cracks and starts causing some panic, the government investigates a bit further only to discover that this is not another natural disaster to strike Japan. It’s a creature. It’s a creature that’s beginning to evolve. It’s getting bigger and it’s beyond understanding. The government puts together a special task force to investigate the circumstances and key components of this creature, named Gojira from a missing scientist’s report, and they are running out of time to figure out what it is and stop it…before it destroys Tokyo.

Perhaps the most interesting aspect of what Shin Godzilla offers is that it really is an effective combination of old and new. While I wouldn’t go as far as to say that one needs to see the original 1954 Godzilla to enjoy Shin Godzilla, I would go as far as to say that to get the maximum appreciation for this newest film that it helps. Just the opening of the film, which features both the new and old school Toho logos, is a throwback in a lot of ways to classic Godzilla films and directors Anno and Higuchi keeps the lessons and core belief systems of what worked for the original and bring it back for this one. The style is inherently modern, as many of the sequences for the characters occurs with the camera as a sort of fly on the wall with a lot of close ups and blinking cuts between the snappy dialogue. This modernity of style pairs with the perfectly executed satire of the film’s human characters and situational tension of Godzilla’s appearance. Where the original film focused a lot on the tension of post-nuclear Japan, Shin Godzilla takes the force of nature/natural disaster approach and builds parallels between its events and the various disasters that have struck Japan over the last handful of years like tsunamis, earthquakes, and Fukushima. The characters are all government officials desperately trying to handle the situation and it uses a heavy handed satire about their inability to set aside their personal political goals for the sake of the country itself and the monster that is threatening to dismantle it. At times there can be a few too many characters for its own good as it rapid fires in smaller subplots at the audience, but it’s less of a concern when one realizes that it’s all part of the satire about how the government operates. At times, for a western audience at least, some of the dense political sarcasm and approach to how the “world political” scheme works (including a great handful of jabs at America) can be a lot to consume as the film continually pelts the audience with its own cultural norms, laws, and regulation, but it’s so impressively executed that it’s hard to deny that Shin Godzilla knows exactly what it is doing.

This is a monster movie though and we have not even spoken about the titular monster at this point. Godzilla might actually be the most fascinating blend of old and new even when compared to the depth and style. While taking various forms in the film as he evolves, the film does present him as a combination of modern and classic just in how the film shoots him and his “attacks” on Japan. Yes, in the film outside of a few head shots that seem to be puppetry with CGI enhancement, Godzilla is CGI rendered (the modern), but he’s done so in a way that looks like a man in a suit (the classic) when he moves and how the locations around him are destroyed in his wake. At times, I wasn’t sure if the locations in the destruction sequences were all CG or a combination of models and CG. That’s a great thing and Shin Godzilla takes these blends of style and makes a film that feels unique in the Godzilla franchise while still retaining enough of the classic pieces that fans need to satiate them. Godzilla, unlike in the newest American adaption, remains the film’s villain (of sorts) and he’s pretty fuckin’ evil at times. Not that the creature is ever presented as intentionally evil like in GMK, but his burnt exterior, unmoving eyes, and set of thermonuclear attacks (yes, there are more than just his breath this time around) makes for a formidable antagonist for our pseudo-protagonists and one that has as much underlying meaning as the original one did.

For those who are Godzilla fans, then Shin Godzilla is a must see. It’s a brilliant combination of modernization of the story with enough throwback elements to homage the original in some remarkably thoughtful and refreshing ways. It’s also a film that isn’t afraid to be its own with its deep running sarcasm and satire about the Japanese government (and world governments too) and some new aspects to our favorite monster Big G to keep things distinct to this film. The balance between its human characters and the destruction of our monster attacks is effective and the stylized look of the film – in both portions – makes for a grand kick off for a new era of Toho Godzilla. Not only is this film good, but it’s easily one of the best that this decades long franchise has to offer. I give this a full lunged Skreeonk.

I’m not sure how they’re going to follow this one up, honestly, but I’m definitely excited to see where it goes.

Written By Matt Reifschneider
Posted by DarkReif at 10:47 AM