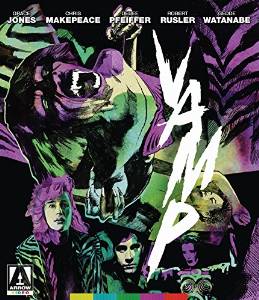 Throughout the various groups and circles of cult cinema fans that I find myself included in, it was very rare that I would hear anything about Vamp. If I did, it was usually in a context of comparing it to Fright Night, another 80s vampire comedy that has earned a significant cult status as time as passed. Nonetheless I was excited when my copy of Vamp arrived, a newly released Blu Ray version via the Criterion of cult cinema Arrow Video, and I was eager to sink my own fangs into this highly overlooked piece of comedic vampire film. While it is easy to see why Vamp does come in as a similar and slightly inferior film to Fright Night as so many acquaintances had stated, Vamp is also a film that deserves a much larger fan base than the one it has as it blends the horror, humor, camp, and quirks in a lot of ambitious and often surprising ways. How wrong can one go with a film about college guys who wander into a strip club full of vampires? Certainly not wrong enough to be as shockingly overlooked as Vamp seems to be.

Two roommates and best friends Keith (Makepeace) and AJ (Rusler) are intent on getting into the fraternity of their choosing. However, the one that they want to get into has requested that they bring a stripper to the next party. With a little over $80 between them and having the nerdy rich kid tag along so that they can borrow his car, they are off to an ‘after dark’ strip club to hire a stripper. They are going to find out that the night has a whole lot more in store for them than just college shenanigans.

Combining two popular genre films like the college comedy and the vampire film is not necessarily all that original (at least in basic concept), but when it comes to a decade like the 80s than the results are usually impressively fun and outrageous – even if the quality of film is not great. Vamp doesn’t necessarily try to burn a lot of new pathways for itself outside of hitting many of the predictable plot progressions and that occasionally can be its pit fall. Even the characters, as fun as they are, tend to play things a little too safe. Our two main heroes are the basic “friends” college kids, the nerdy friend is awkward and great for punchlines, and even the villains are meant to play on the vampire clichés of the time (right down to the borderline silent main villain and a variety of bug eating henchmen). It hits all the marks needed to build itself a decent base of characters and it adds in enough sexual tension, cheesy one liners, and comedic action to sell its basic concepts. This isn’t a film that is out to rewrite the book on either vampire flicks or college comedies and in that manner it does play things rather safe.

However, one of the saving graces – and it’s a talent that Vamp uses repeatedly – is that it simply has a lot of fun being quirky and stylistic in these cliché moments and choices. Many of the secondary characters are delightfully off beat, including the romantic subplot where one of our male leads does not remember her from his past at all, and the film takes the cliché obstacles of the main characters’ escape outrageous. How else do you add an antagonist gang of albinos into a film like this? Well Vamp did and it makes it a very memorable experience despite its rather predictable nature. It also helps that director Richard Wenk really does attempt to slather the film in fun approaches to the visual and tone of the film. By the time our protagonists land in the ‘world’ of vampires, Vamp takes an artful approach to giving the film a fantastical feel with its green and pink lighting of sets and often otherworldly moments of empty streets and claustrophobic underground passages. This is kind of slightly artistic and ambitious approach that happens again and again throughout the film in subtle ( and occasionally humorous) ways.  None of it is wholly original, but it’s ambitious enough in this film to give it a much needed edge to make it a memorable and fun picture.

For those who are already fans of the film (and for those that enjoyed it as much as I did initially), this latest Blu Ray release of the film also sports some great extra features – all of which are listed below. The high definition transfer is solid although hardly some of the best we've seen from the Arrow camp, but it’s the addition of a brand new documentary with damn near all of the key creative components of the film – sans Grace Jones and from what they have to say about her inclusion in the film it’s probably for the best, that makes this release a must own. As a bonus, there is even a short film from the director that’s a bit of icing on the cake for this release too. It’s not a massively packed set of special features, but the pieces that are including very much add to the entire entertaining value of Vamp and that makes them effective additions to an already strong film worth the purchase.

While it might be true that Vamp ultimately seems a bit too predictable to retain a mainstream value that a film like Fright Night has received, but it’s also a film that deserves a bit of its own spot light for cult cinephiles. It’s a fun and ambitiously sly with its artistic approaches to what could have been a throw away concept and it works in enough horror and humor to appeal to a much broader fan base than the film seems to have currently. It may not be the instant classic so many 80s horror comedies have become with time, but it’s one of those overlooked films that is most deserving of the Arrow Video treatment to introduce it to an entire new generation. This gets a very high recommendation from us.