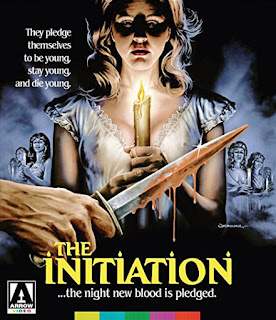 Like many of the slashers in the 80s, The Initiation desperately tried to set itself apart from the rest of the pack by using gimmicks and marketing ploys to its benefit. With the title, posters, and slogans, The Initiation plays up the idea of college sorority pledges and uses a lot of cult like symbolism to sell its slasher as something more than just a hack n’ bleed college kid slaughter. The plot does center around new pledges to a sorority, but it’s hardly a film that the marketing (looking back at least) makes it seem like. No, The Initiation is more or less your standard slasher that introduces a variety of topics to give it a unique spin on its competition in 1984 and the resulting film is scattered and often unfocused. For every idiotic piece though, there is a bit of style or thoughtful tidbit that balances it out. However, despite some decent efforts at being a memorable little horror film, The Initiation just comes off as uneven more than anything else. Occasionally charming, worthy of some of the cult status it has achieved over time, but hardly one of the genre’s best.

Kelly (Zuniga) is one of the handful of pledges to college sorority. She aims to go her own way and try not to use the influence of her very wealthy parents as a means to skate by. However, a reoccurring nightmare from her youth about a man being lit on fire in her house keeps coming up and it’s starting to take its toll. She meets a young dream researcher Peter (Read) and together they are going to investigate what her dreams actually mean…but when they find out the truth, is it going to end up killing them all?

There are a lot of great pieces on display in The Initiation that showcase the potential this slasher could have had. While the film starts off by walking down the overly tread path of college girls caught in the path of a murderous killer and using the initiation of pledges as a back drop, this film tends to meander off of that and into more interesting territory. The inclusion of the dream aspects and the twists those bring about might be common place too, but it adds a bit of spice to the overall plot that works. It builds more mystery behind the basic slasher core that plays out over the film and with many of the hints that are delivered through various stages of the dream analysis lead the audience to believe that there is much more to the story than just a killer from a mental asylum looking for revenge and justice. This is boosted by some decent performances from the main players and some fun chemistry that makes the audience hook into their predicament. Even better? Director Larry Stewart piles on just enough tension and style to keep things feeling tight throughout the film even when things start to get problematic.

…and things do get very problematic here in The Initiation. Despite a lot of little things that the film does well – tension, some onscreen chemistry, and interesting ideas – this slasher is horrendously incohesive. It tries to be clever with its use of dream analysis, but it never gels with the rest of the slasher core. By the time the finale arrives, it’s your generic slasher tropes with an empty mall backing. The humor used is also hit or miss and many of the film’s subplots go absolutely nowhere. Most of the secondary cast is fodder for the slaughter. The entire dream aspect that worked so well in the first and second acts is almost completely abandoned and never brought full circle in the last act which leaves the big twist of the ending to die, suffocating from poorly executed shock and nonsensical development. I don’t want to give the ending away, but it almost comes completely out of the left field and the film never deems it necessary to explain it at all despite a very useful storytelling tool of the dream sequences. It’s almost stunning how poorly developed the final beats of this film are and it knocks the entire film down a few notches.

For slasher fans, The Initiation will quench that formulaic, occasionally fun, blood lust that these films can satiate. However, in spite of many of the better ideas and executed elements on display in the film, it comes off as too inconsistent and illogical to work nearly as well as it might have. The potential for the seminal slasher classic is in the film, but The Initiation tends to do everything that it can to make sure those heights cannot be reached with its meandering script and leaping narrative. In some ways, the flaws of this film are a great reason that it has touched on cult status at this point and for slasher fans it will be a fun watch. For those looking for something a bit more, The Initiation might be one event that you do not RSVP to, but show up fashionably late for and enjoy it for what it is.