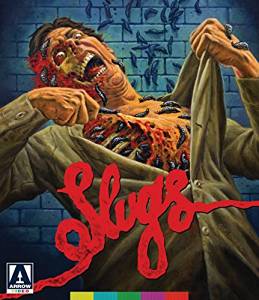 Spanish director J.P. Simon may not be known for making great movies, but he sure is known for making entertaining ones. This is the reason I was rather excited to dive into Slugs, Simon’s little creature feature that features more slime, gore, and explosions than one would ever expect a killer insect movie to ever have. Now I’m not saying that Slugs is a film that defies it genre and rises above it, rather I’m saying that it’s a film that certainly embraces its tongue-in-cheek aspects and runs with them instead of battling them. It’s hardly a great film in any sense, for a variety of reasons, but there is definitely a reason why Arrow Video deemed it worthy of a restoration and packed Blu Ray release. That’s because it is a film worthy of the cult classic tag that packs a punch in with its shiny, slimy titular stars. This is a film that ultimately entertains before anything else and for that it’s deserving of its status.

Nothing much happens in a small town, but when people start dying in mysterious ways it’s big news. However, Mike Brady’s (Garfield) theory about killer slugs in the sewers is anything but believable for the rest of the shocked town. That doesn’t means it’s not true and he only has so much time to stop them from spreading and eating every last person in town.

Killer bug films are fairly common in the horror genre and even when it comes to horror comedy they seem to be a regular focus for the subject matter. If anything, I was hesitant that Slugs was going to be a film that didn’t find a balance. It would either be too serious or too silly. However, Slugs is a film that finds the perfect sweet spot in-between the two. It’s seriously silly. Perhaps it’s the era that it was released in, being the late 80s, but Slugs knows how to play things serious but deliver some entertainingly awesome and funny pieces while doing so. Some of it is intentional, including a great sequence where our hero goes to the water supply manager to beg for his help, but sometimes its unintentional too as the film fully runs with its silly man-eating slugs concept. Seeing a slug with fangs bite a finger is truly something you don’t see too often and it makes this film even better for throwing it down. Director J.P. Simon seems to understand the keys to making it all work and does just that – right down to even adding in some strong visuals for punctuation. As I mentioned briefly, you’ll never see another film like this with so many unnecessary explosions. This is why Slugs works and why it’s so much fun to watch.

Slugs isn’t perfect though. Even with its tongue-in-cheek approach (which can cover a lot of its silliness and oddities of script,) it can’t cover it all. Some of the issues that arise in the film come from some hints at a more ambitious film that never comes to fruition. Themes about conspiracies between government and corporations, the accountability of different government sections, and even environmentalism are all touched on in various moments, but rarely embraced by the film. It occasionally adds to the fun of the film (landing in the unintentional humor portion of it), but it ultimately hinders the film as a whole from truly reaching the heights it might have reached with a more ambitious script. The film also has a weird habit to add in some subplots that are really unnecessary. An entire sequence with teens at a party in the last act essentially goes nowhere and feels out of place and a poor tie in for the various teen sequences that came earlier to add in plot and characters for the film. Not that anyone really cares for the most part about either of these flaws because Slugs ably executes what it is without any pretense and that’s something to be respected too.

It has to be mentioned that this latest release of Slugs is a pretty effective and impressive one too. The look of the restoration is definitely striking, particularly in the scenes with the shiny black slugs that look sharp and defined, and it's packed with some new interviews for fans and even a very informative commentary. It’s not one of Arrow’s most impressive set of features, but the restoration is key to why this film is deserving of its upgrade and it’s more than impressive.

Slugs might not be the perfect 80s creature feature with its lacking social and environmental commentary that it touches on and its occasionally muddy script, but it’s so much fun and effectively entertaining that it’s deserving of a lot of the praise it receives in cult cinema circles. The tongue-in-cheek approach is the perfect way to go about it and director Simon knows how to balance the serious with the silly so it always has that going for it. Cult fans will definitely love to add it to their collection, particularly if you are a killer bug film fanatic, and this one fits right in with what Blood Brothers enjoys.