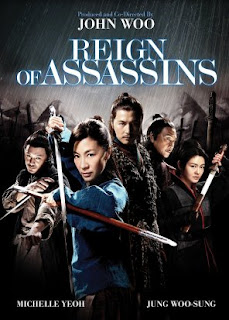 It took them over half of a decade, but finally Reign of Assassins hits the US in home video release. Fortunately, for those martial arts movie fans like myself who held out on importing it, the film was worth the wait. Co-directed by the iconic John Woo and starring the talented Michelle Yeoh, Reign of Assassins is a modern wuxia that blends the classic elements of the style with the modern splash that impresses beyond the normal sense of outrageous epic tones that come with the genre. It’s effective in its heart, stylish in its action, and ultimately a fun and thrilling ride that fans will be wanting to experience. Yes, Reign of Assassins was worth the time spent waiting for it.

Zeng Jing (Michelle Yeoh) has desperately tried to put her past behind her. She was once an elite assassin with the Dark Stone clan, but when her boss becomes infatuated with finding the remains of a powerful kung fu monk and unlocking its secrets she steals the remains and hides them only to go into hiding herself. Now she’s married to a wonderful husband (Jung Woo-sung) and trying to get on with her life. That is, until a bank robbery brings her skill set out into the open and the Dark Stone assassins catch scent of her existence. Now it will be a fight to death to finally bury the life she left behind to live the one she wants.

It’s wonderful that it seems wuxia is making a comeback lately. Perhaps this was one of the reasons that Anchor Bay decided to finally released Reign of Assassins. The Chinese box office is booming and there is a renewed interest in telling stories in this style. Even though this film came out around 2010 overseas, where the wuxia style has remained a somewhat prevalent force in film style for most of Chinese film existence, these films are finally seeing a renewed rebirth on a wider world wide scale. It definitely helps that Reign of Assassins is able to relate the foundations of the genre in a modern way and do it successfully. It’s not nearly as artistic as Zhang Yimou’s wuxia films like House of Flying Daggers, but it is a step up from some of the more mainstream and watered down material like Crouching Tiger, Hidden Dragon 2 (which was fun and entertaining despite its flaws). Reign may not convince those skeptical of the style to change their minds, but it has enough classic flavor to appease established fans and enough story and style to win over those cinephiles who are fringing on the genre.

Perhaps one of the keys for Reign of Assassins to work is that it seems to throwback to classic Shaw Brothers wuxia films from the 70s in many of its structure elements and gimmicks. Structurally speaking, the film does have to seemingly fast forward through many pieces of its plotting to be able to get to the bigger plot devices needed to move the film around. It starts off focusing on the assassins and vomiting out plot points in quick fashion, but it transitions to the “killer hiding in plain sight” plot element that has been used in so many films before. Here is where the film earns some of its charm as it focus on an assassin trying to go straight in her life and finding a young husband who is head over heels for her. Their romantic subplot is heavily overlooked for the sake of pacing, reminding me of tactics that Chor Yuen would use in films like Full Moon Scimitar to pull it off, and luckily the two have solid onscreen chemistry and Jung Woo-sung steals a lot of the scenes from this point on. This happens a variety of times as the movie will leap months at a time to the next event (again, I’m reminded of how Chor Yuen used the technique in films like Dragon Sword and Heaven Sabre to cover the time of a more epic plot), but the pacing is effective and the leaping structure can only come off as a mild nuisance as the onscreen work sparks and the character arcs never suffer horrendously from it. In fact, our assassin in hiding and her husband seem to have fairly strong arcs that work really well to keep the audience engaged and it’s key for this film to work.

From there, Reign of Assassins pummels the audience with plenty of twists, turns, and action pieces to keep them occupied and hooked into the sword clashing chess game that is being played out. The film really works best in the second half (outside of some out of place motivations for the Wheel King that arise in the third act which seem forced) when the layers of various character interactions are being played out. The arrival of her old assassin team is littered with great silly gimmicks, including her replacement who is a woman that seems to have trouble keeping her clothes on and an assassin called The Magician with a bright colored cape who can occasionally shoot fireballs. The action is well shot, not relying too heavily on CGI (a nice change of pace compared to some of the newer wuxia films and perhaps one of key aspects of having John Woo on as a producer and a co-director, I would assume) that’s dynamic and uses the wire work to strong effect. If you are not a martial arts fan that doesn’t buy into the high flying swift sword work and the gimmicks that come with it, than Reign may not work even in this portion, but for those willing to throw their chips in with the movie it can be highly entertaining and filled with just enough heart to work.

Many of the reviews that I read previous to watching Reign of Assassins seemed to have issues with the structure and leaps from the serious tones to the humorous and gimmicky ones, but for this reviewer it was a pleasant blend of old school cheesy mixed with a knack for modern speed and visual dynamics. It can be easy to see why this film garnered some mixed reviews when it first premiered, but the balance of fun and serious worked in spades for me and it garners a place in my collection for films to be watched again and again. Reign of Assassins isn’t high art when it comes to wuxia, but it’s a fantastic balance of entertainment and thoughtful character work that makes it such a great watch. As I mentioned, it won’t make believers out of wuxia skeptics, but for those willing to buy into the gimmicks it’s a highly entertaining and effective watch.