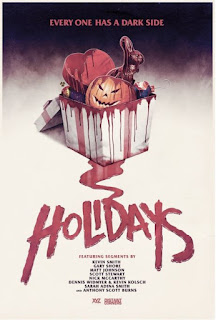 It would seem that the horror anthology is trending as a style now even more than ever and, as a subsidiary of that style, holiday themed horror anthologies is also trending. Between the most obvious Halloween focused films, there was a couple Christmas themed films that were worth their weight in celluloid, but it was only a matter of time before a multitude of holidays made it into one film. The aptly titled Holidays is that film. In a weird combination of holiday themed horror and the ABCs of Death, Holidays is a generally entertaining albeit roller coaster ride of quality for a horror anthology film. It certainly doesn’t reach the heights of the granddaddy of modern anthology films like Trick R Treat, but it’s not nearly as a mixed bag as the previously mentioned ABCs of Death or the horrific V/H/S/3. For horror fans, it’s a nice combination of diverse stories, but it’s also hardly one of the best that the style has to offer. In anthologies, it’s obvious that audiences are going to have some stories that hit home and others that flounder. With Holidays, it’s the same as the rest. If anything, at least all of the stories are entertaining to some degree even if that entertainment focus fluctuates between the various stories depending on their style.
Perhaps the biggest and most respectable aspect about this film is that the stories are shockingly diverse in style and intent and all of them seem decently ambitious to tell a fun (and usually darkly comic) tale for each holiday. Holidays starts off with Valentine’s Day and while the story itself is mediocre, it’s made up for with a visual flair that keeps it on track with a strong auditory and photographic presence that carries it. This kind of balance is attempted throughout the film to some success (the Father’s Day segment is almost too good to be part of this film) and some that are horrifyingly bad (Kevin Smith’s Halloween story should be considered a crime against good taste). All in all, there is some ambitious young talent to be found in Holidays, but mostly the film lacks the insight to be one of the best anthologies in this modern age. 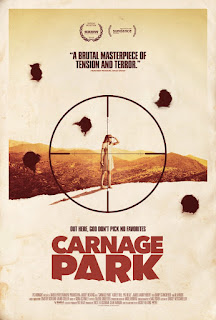 Riding the line between artsy indie film and grindhouse horror, Carnage Park is the best film that Mickey Keating has done thus far and it delivers on some shockingly effective fronts that I did not expect. It's almost like an homage to the 70s era indie horror greats like Wes Craven and Tobe Hooper with just enough of a modern throwback edge that keeps it feeling slightly fresh and not like a rehash of Texas Chainsaw Massacre or the like.  Keating has always been on the edge of delivering a phenomenal film with both Ritual and Pod showcasing some serious talent on crafting atmosphere, but with Carnage Park he reaches new heights. The film takes some strong narrative twists and turns, it uses its rural setting to a maximum isolating effect, and it rides on the naturalistic performances from some of horror’s most underrated actors and actresses. Seriously, combing the innocent deer-in-the-headlights performance of Ashley Bell with an overly creepy and layered performance by Pat Healy is damn near brilliant. Now, it's style and gritty approach may not be for everyone with its rather vague and atmosphere focused narrative, but horror fans looking for something tense and fresh in its 70s grindhouse throwback tone will definitely want to dig into what Carnage Park has to offer. 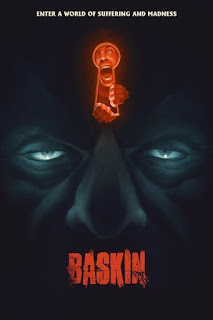 In a way, I really wanted more out of Baskin. Initial trailers and whatnot made the film seem like a legitimate mindfuck of epic proportions and while the film is certainly one that likes to toy with perception (for a fantastic third act that really toys with its own perception of what is happening) it doesn't quite go far enough for my tastes as it does try to adhere to a strong and clear structure for the audience throughout its runtime. There are hints to the truly outrageous elements that Baskin could have run with, but the film spends too long in the first act establishing characters that are not nearly as interesting or layered to feed into the oddities that the film touches on later. Once the film gets movie as it adds in the horror elements of its third act, it seems to work much better. The execution onscreen is very impressive though with special effects and strong performances, but I think my expectations made this film feel that this film didn't quite go the distance. However, I would assume that this film grows on me with repeated viewings and time as there might be more to it than I was willing to accept on just a single viewing. It just seems like a film that open up its layers with time. Until then, it seems deserving of its sold, if not slightly disappointing mid-range score.