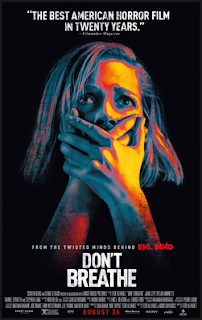 When the announcement of the Evil Dead remake came out (that it was actually going to happen, more than the announcement itself which had been speculated for years), there was a bit of an online surge that argued about who – and why – certain young directors should or shouldn’t be given the job. Yet, Sam Raimi and his producer cohorts chose a rather young new director to the helm the widely divisive project, Fede Alvarez. Fortunately, the young director showed a lot of skill to tight rope walk the line between new elements and throwback pieces for the project and did it with a strong visual flair. However, since that time Alvarez has remained mostly under the radar with no huge announcements for new movies or being courted for bigger franchises. This is what made Don’t Breathe such a dark horse for 2016. Under the production umbrella of Sam Raimi and his company Ghost House Pictures, Alvarez went for a smaller and original horror thriller that was less about namesake and more about execution. Don’t Breathe is easily the sleeper hit of the year, coming into the box office to win a couple weekends. It fully deserves it too because Don’t Breathe is easily one of the most intense and driven cinema experiences of the year. It’s got an inspired visual flair to it and it balances simplicity with vicious tension. It’s a film that truly leaves its audience breathless.

For Rocky (Levy), her boyfriend (Zovatto), and her friend Alex (Dylan Minnette), robbing houses is less about being the rebellious youth they are and more about surviving or making statements. When the opportunity comes up to make a lot of cash very quickly by breaking into a blind veteran’s (Lang) house in an abandoned neighborhood of Detroit, it’s a quick decision. However, things are not what they seem in this lone house on the empty street and soon these three will be in a fight for their lives.

There are many times, in this day and age, that films try to be too complicated for their own good. They throw in needless twists and subplots when they don’t need to be there. Don’t Breathe has just enough back story, character work, and plotting to keep the pacing and make our three protagonists worthy enough to root for. None of its writing is excessive and when the few twists it does have in its story do come up, they feel effective in their shocks because it’s evident that the film does not need them to work. The focus of this film is create tension. It’s obvious from its title that Alvarez and company seem intent on this focus and build the rest of the film only to keep the tension mounting. This does leave the film open to some occasional plot gaps or vague character choices that can be missed if the viewer isn’t paying attention, but it also works because the film uses all of its pieces to build up the tension. It’s a simple concept that Don’t Breathe executes with effective regard. Whether it’s the first time our thieves enter the house, a pitch black chase sequence in the basement, or even the classic “oh shit, the dog’s coming for me” that is used in so many breaking and entering films (although it’s not nearly as hilarious as it is in People Under the Stairs,) this film never lets up and it's glorious.


After the initial set up and a rather sly tease in the opening sequence, the gloves are off and Don’t Breathe executes with the force of a surgical blade in its precision. The film rocks some phenomenal performances from its small cast, although special credit has to be given to Stephen Lang as the blind house owner whose sheer presence induced jump scares and screams from the theatrical audience, and they carry a lot of burden to get the tension to translate to the viewers. However, truly the star of this film is not any of its realistic characters, efficient writing, or strong actors. As if I need to say it again, it’s director Fede Alvarez. From the opening descent to the final pull away shot, he simply destroys this film visually. Some of it is subtle, like his use of colored lights to invoke emotional layers of yellow, reds, and greens that seem to indicate a bit of an old school Italian influence, but sometimes he goes big including a “no edit” camera shot when the thieves are exploring the house initially that twists, spins, glides, and zooms its way to give the audience a rather thorough mapping of how the house is. It’s this kind of balance, between modern style and classic tension building that makes this film the sleeper hit (critically) that it deserves to be. It’s executed impressively along a variety of planes, but his ability to make it all a cohesive white knuckle experience has to acknowledged.

For a year that has been rather horrendously hit or miss for horror films, it’s a huge sigh of relief to know that Don’t Breathe is one of the best that the genre and industry has to offer. This film is tight, vicious, and executed almost perfectly. It’s also impressive to know that Fede Alvarez has solidified himself as one of the modern horror maestros and that Evil Dead wasn’t a one trick pony. Now let’s just hope that he doesn’t take quite as long to reveal his next project because if it’s even half as good as Don’t Breathe is, then it’s still going to be a film to see.