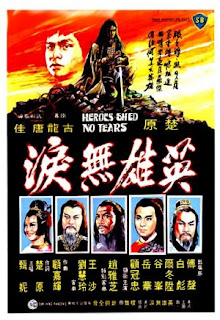 Truthfully, I kept setting aside Heroes Shed No Tears because I was under the impression that Alexander Fu Sheng was the lead in the film. Technically, he is and I am not a huge fan of films where he has to carry the burden of the emotional weight of the narrative. I know, I know. It’s blasphemy, right? However, this Shawtember I have been digging through most of Derek Yee’s filmography for the Shaw Brothers studio and I found myself staring at the Heroes Shed No Tears copy on my shelf… since he is the main villain of the film. To my surprise, not only is this film a wonderfully fun wuxia with plenty of gimmicks and classic characters, but it’s also a remarkably thoughtful film on the insight of fame, power, and manipulation. It also helps that it’s less of Fu Sheng’s film and more of an ensemble effort with some powerful performances. It gets to where it needs to be through its smart writing and entertaining set pieces which is how all great wuxia films should be and it makes Heroes Shed No Tears something of an underrated Shaw Brothers film.

For Kao (Alexander Fu Sheng), it wasn’t just enough to be trained by an elusive master, but at the end of his training he is entrusted with a legendary sword, stained by tears, and told that he will be the only one to end a major crisis in the martial world that is brewing. So he sets off to seize his destiny and stumbles into a massive feud between some major clans and their fabled leaders. When it would seem that things couldn’t get worse, a massive conspiracy unveils itself where Kao himself may be one of the major players in setting it off.

Wuxia films can be criticized for their remarkably similar plotting. Sure, a young hot-headed hero gets a mythical weapon and a destiny while his role in the complicated martial arts world is much larger than expected, but a strong selling point in Heroes Shed No Tears is just how tight the writing and character arcs come across as. When the film first started, it was something a bit more hum drum and plot centered and it left a bit to be desired, but by the start of the second act and moving into the ultimate showdown of the finale the film garners a lot of depth and impact. The plotting itself is rather predictable by wuxia standards with plenty of reveals and double crosses to be had, although don’t expect all of the twists to be easily solved. Yet, with the strength of its characters and the dedication to the entertaining aspects of its gimmicks, it’s a movie that slyly engages its viewer with its effective writing and execution. It features a variety of great thematic punches, including one about the anxiety created by ones stature in the realm of the martial arts world that features a fantastic ‘drunken’ performance from one of the ensemble leads, and despite having a robust filmography, this might be Ku Feng’s most diverse and impressive performance I’ve seen in his career as he slowly descends into a sorrowful madness. Derek Yee pops up as a sort of “chess master” villain in the film, worthy of his heady performance and condescending monologues. Truthfully, the one sore spot of the film is Fu Sheng who looks perpetually perplexed at any given time. He’s lucky his character is interesting and that the rest of the cast carries him because otherwise he might have been a very large and sore spot for the rest of the film.

It helps that the film is remarkably fun to add to its strong character work and thematic depths. Many of the selling points of a Chor Yuen wuxia is the visual style and gimmicky characters that he embraces and Heroes Shed No Tears is brimming with both. Between the lavish sets, dynamic color schemes, and wonderfully choreographed fight sequences, this film does its best with its occasionally predictable script and keeps this light and fun on the surface. It also helps that there are a lot of diverse fights, considering its wuxia formula, with various weapon battles and character clashes that feed into the style of the fights. It might be silly occasionally, one character has a magic box of weapons that acts like Felix the Cat’s magic bag of tricks, but it leads into some highly entertaining sequences that any martial arts fan is going to enjoy.

Heroes Shed No Tears may start on the wrong foot with some predictable wuxia set up and a mediocre performance from Alexander Fu Sheng to get the narrative ball rolling, but by the second and third acts this film is riding high on its strong characters and notable balance between serious emotional beats and highly entertaining surface elements. It’s a flawed film ultimately, but it’s one that can cover up some of its bumps and bruises with the stronger elements of its writing and characters that makes it an effective wuxia in the end. I may have had my doubts going into the film, but it comes out as a massive and very pleasant surprise in the end.

Written By Matt Reifschneider
Posted by DarkReif at 7:10 AM