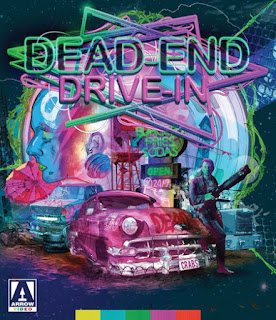 Brian Trenchard-Smith is most definitely one of the kings of low budget and very entertaining cinema. His work in the 90s with Night of the Demons 2 and the Leprechaun series lives on as classics of the straight to home video market, but his work in the 80s is just as entertaining – if not more. This includes Dead End Drive-In, a Ozsploitation gem that blends post-apocalyptic action with popular 80s punk rock culture to deliver one of the most off beat and highly entertaining cult films of the era. Considering its stature as a cult classic, it was only a matter of time before it got an upgraded release and it’s nice to know that Arrow Video appreciates the film as so many of its fans do. The film itself is not necessarily a great one, it’s ambitious in its oddities, but hardly one that raises the bar for the era. Still, it’s hard not to love it for its charming quirks and its trashy low budget ambitions and that’s the key point that drives Dead End Drive-In to being the cult classic it is.

For Jimmy (Manning), life is just trying to find his way. In a world where the government is struggling to hold onto any sense of structure, his own sense of person is trying to be like his dad – a tow truck driver who knows and stands his ground. When Jimmy takes his girlfriend Carmen (McCurry) to the local drive-in and their wheels are stolen off of their car, they find themselves trapped in a sort of “camp” that won’t let them out, no matter how determined they may be.

Dead End Drive-In is the kind of film that mixes a lot of iconic things from the 80s into something altogether strange. It’s a film that has a sort of Road Warrior tone with its use of cars and stunts, but it also remains well into the realm of 80s punk satire with a strong dose of quirky humor as its hook into the audience. The combination, while not necessarily one that blends together all the time, works to craft an entertaining film that’s full of back ground strangeness and over the top broad stroke characters. Even the concept of its synopsis is just weird and the film never goes out of its way to explain the whys for many of the questions that arise. In this sense, it’s both engaging and slightly frustrating. It’s a world on the down turn where cars are a kind of currency in the collapsing economy and “Carboys” savagely scrap cars for selling and tow truck men act as a balance to them. Even the concept of the drive-in in the film, where stranded folks are kept away from the working parts of society, is meant to be symbolic on some levels to prison-like culture that the government forces people of poverty or outsiders into to try and keep society moving forward. This thoughtful undertone is there and its satirical jab at the punk youth and their focus on consumption of things that don’t matter (junk food, bad movies, their own clicks…and racism?) does give the film some weight when it starts to play out. It’s too bad that these thoughtful and symbolic elements are simply details of the whole. These social commentaries are not explored with the kind of intent that would have lifted Dead End Drive-In into a new echelon of cult cinema. As is, they are simply there for the audience to have tastes of and they remain as a subtext of the whole rather than a part of it. Truthfully, it’s fascinating that they are there at all in a film like this, so Dead End Drive-In has that going for it.

Beyond the social commentary subtext, Dead End Drive-In is the kind of cult cinema that is worthy of enough quirky praise to warrant such a nice release. Trenchard-Smith has a knack for making things fun and ultimately entertaining as he takes his likable non-hero and has him fight against the conspiracy laden government system and a society that has ceased to care. The concept of this semi-post-apocalyptic world allows for a lot of very fun and 80s inspired designs from its punk influenced costume work, the 80s pop music of its soundtrack, and its junkyard life of the drive-in set design. The director runs with this and gives the film an offbeat humor to match its craziness and then blends in plenty of low-budget action spectacle to keep things even more entertaining. The stunt work and car chases are shockingly effective/impressive and even a fight between our young non-hero and one of the “villains” of the drive-in is highly entertaining in its design and set up. By the time the third act rolls around and the film hits full speed, it’s hard to ignore just how fascinatingly fun it is.

This latest Arrow Video release is a robust one that cult cinema collectors will definitely want to check out. The new restoration is sharp and gives the bright color schemes and visual layering (there is so much that happens in each shot) a nice beautiful new look and the film has a plethora of new special features that fans of Trenchard-Smith are going to want to have including an audio commentary from the director and a couple of rare short films from him like a documentary on Grant Page and a public information film that has to be seen to be believed. It's not Arrow's most impressive package from the year, but fans of the film or director will definitely want it in their collection nonetheless.

All in all, Dead End Drive-In is a highly entertaining cult cinema classic with just enough social commentary to make it one of those rare gems that too many people overlook. It’s not perfect in its balance of the two, it occasionally leaves some major gaps in its narrative, and I desperately wanted the film to go further with its symbolic pieces, but in the end the film succeeds at what it does best – making a quirky action comedy with enough wink and car wrecks to appease B-movie fans the world around. Dead End Drive-In comes with a strong recommendation for cult cinema fanatics.