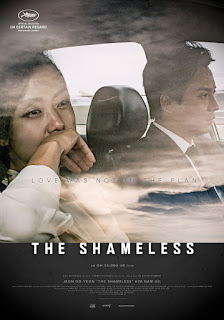 I went into this film, excited, but not really knowing what to expect. I had heard some great things from one of my friends in Korea, who is a critic himself, so he had me sold on it, but even then his details and praise were pretty vague. All I know is that Jeon Do-yeon is my favorite actress, and so naturally, I am always down to see whatever film she stars in next. This fanboy loyalty (I worded that weird) led me to one of my favorite Korean films I've had the pleasure of seeing in quite some time.

A modern noir, complete with awesome atmosphere and great dialogue, The Shameless is a gigantic web of bad people out to get each other, on both sides of the law. I really can't think of a way to sell this one as I really don't want to spoil anything, but an undercover cop falls in love with the mistress of a man he is trying to bust and things get very interesting - and oh so intense. I loved it every minute of the way.

The acting in this film is spot on from the leads all the way down to the most minute characters that may only appear in a scene or two. Everyone was cast perfectly. Jeon Do-yeon uses her typical balance of frailty and power to perfection. There is a lot of depth to both her character and the lead man, played by Kim Nam-gil. I actually haven't seen him in anything really, but knowing who he is I can say that chopping his hair off and losing his signature mustache gave him enough of an unusual appearance that he appeared to really get lost into character. Maybe a useless observation, but I believe it to be true.

Like most good Korean flicks, depending on the genre of course, there are plenty of good twists and turns along the way, and seeing the characters' all slowly reveal their true nature throughout is great, though there is a lot of dark and disgusting people in this, but I digress. There isn't really anyone to route for, but everyone is so broken and interesting, you can't help but want to see what happens next.

Though there is essentially no action in the entirety of the movie. There is one throw down between the lead detective and the guy he is out to get, early on, and it is brilliantly staged and executed and I felt it was worth praising. Every punch and slam down (on the good old concrete by a row of parked cars) is felt and I was so impressed that I revisited that scene numerous times after the film was over. A brief moment that leaves quite the impression on the viewer.


Sadly, The Shameless is going to be one of those films that not too many people outside of Korea will see and that is a shame. It's a great character piece, has absolutely excellent cinematography and atmosphere, an interesting score (that works), and it is topped off by powerhouse performances from everyone. Essentially, I can't really find anything to complain about this film. I don't think it's absolutely perfect, but it's very close. This one needs to be seen by fans of Korean cinema.