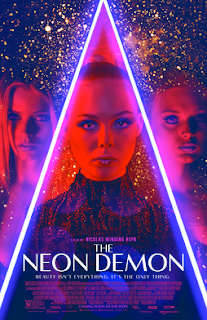 Nicolas Winding Refn has always been one of my favorite modern directors. His style and blend of surrealistic and artful symbolism with gritty grindhouse concepts makes him one of the more unique visionaries currently working. However, his last film Only God Forgives left a substantial sour taste with me. His balance between the two seemed to flounder as he went extreme in both directions and produced a film that felt like the two worlds he was so spectacular at balancing were going to war. I know plenty of people that loved the movie for that very reason, but it didn’t sit as well for me. Going into his latest film, The Neon Demon, it was hard to necessarily wipe that sour aftertaste away from Only God Forgives so I kept my hype in check going into the film. Thankfully, The Neon Demon seems to be a return to form for the divisive director and it finds the balance between arthouse and grindhouse in some stunningly effective ways. It may not be his best film to date, but it certainly showcases why he is loved by cult cinema fans.

Jesse (Fanning) has been blessed with natural beauty and her move to Los Angeles to become a model seems to be paying off. On her first shoot, she meets Ruby (Malone) and two other models (Heathcote and Lee) whom seem to share a combination of awe and distaste of her. However, as Jesse’s quick ascension goes to her head, it creates a vacuum of power struggle that may consume all of them.

Like many of Refn’s earlier works, The Neon Demon is less concerned with plot as it is massively concerned with narrative. This focus is what makes him such a divisive director, but when it comes to The Neon Demon it is a focus that works for the benefit of the film and its vague characters. Nowhere does the film feel the need to over explain itself, allowing the visuals and small tidbits of information to paint the pictures to a puzzle that the audience has to piece together themselves. This can be frustrating at times for the audience, even I desperately was looking for it to feed me more dialogue or background development at times, but the film has a knack for sweeping its audience along with it as its undercurrents of glitter, glam, and power start to shift into what resembles a plot. The characters are less like real people to get to know and more or less symbols within the narrative with its themes. Even Jesse, whom we assume is a Midwestern teen girl with ambitions, more or less de-evolves from a person and into a theme by the end of the film. This happens to most of the characters throughout the film as it explores themes of power, beauty, and extremes that social values go about dehumanizing women into things. Symbolically, the film works on a plethora of layers – most of which I will not necessarily explore in this review as it would quickly turn into an essay, but just keep in mind that it’s the themes and narrative that reign supreme in the film more than plot or characters and it makes for a lasting and impactful experience.

As for the execution of its core narrative, Refn is immaculately talented at crafting the visuals and space to really balance out its blend of arthouse elements with its grindhouse ones. This balance is key for the narrative and layers to work and The Neon Demon accomplishes just that. The performances are robust and deeply executed (also thanks to Refn’s eye for holding onto the little moments instead of just the major emotional beats) and the film blends darks with almost blinding bright colors to give it another layer to its extreme elements. Think of the fantasy like color schemes of Italian giallo in the world the of slick and sharp angels of Kubrick inspired arthouse cinema and you’ll get the visual drift of what this film is going for. A pulsating and simplistic score undermines all of this with a sense of tension that compliments the visuals and performances in full-bodied ways that only adds to the atmospheric horrors of its thematic tones.

Now, I have mentioned grindhouse a few times and I’m sure at this point it doesn’t sound like the film is all that abrasive or edgy to correspond to that comparison. In many ways, the film actually shies away from many of the abrasive things it might have utilized to give it an edgier precision for its message and it works for the better. The film has erotic undertones, but never really goes for the cliché in that manner and it makes the film tighten its tense atmosphere for a good portion of its run time. When the film does go for the more grotesque, horror bits it doesn’t need to go as far to make it feel as impactful and it makes the smaller things feel more abrasive. It’s not a Refn film without a few of this horrific moments and The Neon Demon as a few worthy of his reputation including a love making scene that is meant to make all of the audience feel uncomfortable.

Perhaps the biggest issue that arose with the film is that it reaches its logical conclusion about 20 minutes from its actual ending and the narrative pushes forward past that point. It’s saved by featuring perhaps the most shocking scene of the film in the last few minutes and it wraps up some of the thematic threads that were running through the rest of the film, but it almost seems like it’s tacked onto the rest of the film. It’s a small complaint because it works, but it just doesn’t flow quite as well as the rest of the film so it feels like it stutters a bit getting there even if the overall effect of its addition is worth it.

In the end, The Neon Demon is a rightful return to form for director Refn. It’s an atmospherically dense and impactful film full layers and execution that make it one of the best horror films of the year, if not one of the best films of the year period. It’s the kind of artful execution and shocks that linger long after the credits have rolled on the film. This is the kind of out of boundaries cinema that needs to exist and I’m glad that The Neon Demon is getting people to have emotional responses to it. It’s nice to have Refn back in full form.