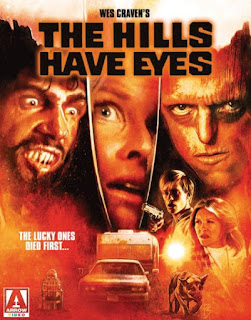 Wes Craven’s quality of film might have taken a turn for the worse in the latter part of his career, but it’s easy to see why the man was an iconic master of horror film making through most of it. His earliest films, low budget horror flicks like this seminal classic The Hills Have Eyes, show a certain spark for abrasive creativity and insightful use of their low budgets. While the film is not perfect, at least not to the extent that some horror fans love to rave about it in the grander scheme of things, The Hills Have Eyes is definitely the cult horror classic it deserves to be too. It uses its obstacles to give itself a raw and desperate tone that works wonders to cover its occasionally flawed performances or narrative speed bumps. To top it off, this latest Blu Ray release of the film from Arrow Video is the home release that fans have been dying to get their hands on with a stellar new restoration and a slew of special features worthy of the purchase. Fans of the film or Wes Craven are definitely going to want to nab this one as both the film and release are worthy of note.

The Carter family is on their little road trip together, but they have a detour first. There's a silver mine they are looking for on the back roads of the Nevada desert that they want to scope out and see if there is anything to find in celebration of mom and dad's anniversary. It's too bad they didn't listen to the gas station clerk's warning. The roads are not only dangerous, but there's something out there likely to make sure they never get to where they are going.

Just saying that this classic of grindhouse cinema isn’t perfect is surely going to irritate its super fans, but in many ways it’s the films imperfections that make it so endearing and timely. The film is not complex. Your basic American family going on a road trip makes a wrong turn and ends up face to face with horrifying consequences, this time in the manner of an inbred (perhaps mutated) family of murderous wandering desert people. Coming three years after Tobe Hooper’s other iconic low budget horror film of a similar concept, The Texas Chainsaw Massacre, it’s hardly a reach to say that The Hills Have Eyes was green lit due to its already proven approach. Much akin to the previous mentioned survivalist horror flick, this one uses its low budget approach and limitations to its benefit. The film is rough around the edges, visually, and its raw tone adds to the isolated and desperate core that is required for the narrative to work. Some of the performances and line delivery may seem a bit tacky or over the top, particularly when the film is trying to give a bit of exposition for events in the first act, but as the film rolls on the cast seems to wear thin (whether that’s just the performances or the fact that they really did work at a breakneck pace in the scorching desert is up to the audience to decipher) and they give more naturalistic reactions to the events occurring around them. The villainous family that torments them is smartly kept off screen for much of the first half, giving the film a sense that the environment is as much of a threat as they are (a key to a lot of isolation that feels suffocating in such an open space) and the protagonist family’s little quarrels work to give them that “everyday Jones’” aspect that works to contrast the inbred family they encounter. The film is simple, but it’s by no means dumb in how it goes about things as it efficiently manufactures the atmosphere needed to sell some of its more outrageous moments towards the end.


Partnered with an eye for abrasive and shocking visuals and a well-executed narrative approach from Craven, The Hills Have Eyes also uses its simplicity to subtly add in very memorable moments. One of the key aspects to this film holding its own almost 40 years after its release is the little details that linger. Even when the film seems a tad cheesy in the opening and fails to capitalize on some of the key beats for characters to add depth (this in particular applies to the character Ruby who is a key component in many of the shifts of narrative between acts, but fails to really have much of a character outside of being a plot progression), there are these moments that just ring out. During a key attack on the trailer in the mid portion of the film, one of the villains proceeds to tear the head off of a small bird and drink its blood. Now, the scene itself is something of a throw away moment in the grand aspect of the plot, but for the narrative it punctuates this odd feeling of complete disregard for life for the villains and it echoes throughout the rest of the film. If this guy is willing to do that, he’ll fuckin’ do anything. It’s these smaller moments, character interactions, and abrasive visuals that really carries the film beyond being just another grindhouse horror flick and as a fan favorite. It’s also the reason that one can easily overlook the flaws of its script and budget restraints. This film is creative in ways beyond its means and its effective.

For fans, this latest Arrow Video Blu Ray release adds a lot of great depth to the film. While the new restoration is certainly the best the film has evervlooked in a home video release, it’s the addition of the alternate ending (my preferred way to watch it and Arrow gives viewers the option to watch the film as a whole with the alternate ending) in HD along with a slew of special features that really perked my attention. A two hour documentary about the making of the film featuring interviews with Wes Craven and the cast/crew is a necessary watch for fans as is the commentary featured on the Blu. It's these kinds of features that really showcase the love and heartfelt attention that go into films like this and it was nice to have it all in one place for fans. This release is easily the ultimate version for fans and it’s just icing on the cake of an already impressive cult cinema experience.

So yes, I will admit that The Hills Have Eyes is not a perfect film, but for the low budget horror feature it is, the film deserves to be the cult classic it has become. It utilizes its own flaws and rough aspects to its advantage, delivering a film that has lasted the test of time and seemingly grows more impressive with each decade that passes since its release. To add to that, this release is also something to be impressed with and fans are going to definitely want to add it to their collection. Arrow Video has been making a lot of waves with underground cult cinema, but this release of The Hills Have Eyes is the kind of treat needed to ring in the Halloween season this year. The film and release only come with some of our highest recommendations.