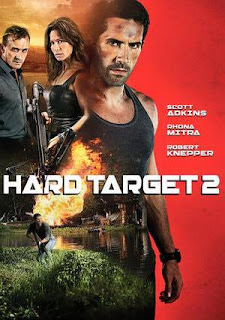 “You have something that belongs to me.”
“A false sense of superiority?”

The mining of nostalgic franchises is not new to the realm of straight to home video. While people seem up in arms about theatrical movies rebooting/remaking/franchising classic series, this has been a very popular thing to do in the home video market for decades. So is it all that surprising that a sequel to Hard Target would be hitting store shelves, VOD, and Netflix 23 years after the original hit theaters? I, for one, am not inherently against the franchising of older films for a newer generation as long as the film works. In the case of Hard Target 2, it does. It works much better than I could have ever hoped for a straight to home video actioner. While the film is hardly perfect and certainly has that low budget ‘do what you can with what you have’ kind of tone to it at times, it’s such a focused and entertaining film that it hardly misses a beat to give action fans a bit of what they want out of a film like Hard Target 2.

For Wes Baylor (Adkins), going to Southeast Asia was just a way to escape. A tragedy to his best friend left the MMA star ragged and racked with guilt, so he goes about fighting for money in street fights throughout the area. When an underground fight promoter Aldrich (Knepper) approaches him with a big payday to set him up for life, Wes is bound to take it. However, the fight isn’t your usual match. This time he will be running for his life and away from a team of hunters ready to take down man’s deadliest prey.

As the credits rolled on Hard Target 2, it occurred to me that the Hard Target spin on man being hunted by man tropes should have been franchised long, long ago. The concept of a group of men hunting an action star through various locales is ripe for the picking in the straight to home video action market. Perhaps it was finding the right combination for it to work though that made Hard Target 2 seem like a no-brainer. Story wise, the film does struggle a bit here and there to get things lined up. It hits a lot of the home video action tropes about a down and out “hero” who has lost his way being thrown into a worse situation where he finds what he needs to fight for. Occasionally, the film could have beefed up some of the dramatic bits – including the use of his friend’s wife and child or the strife of the villagers in the area – for better effect. It doesn’t deter from the overall message, but it would have upped the emotional ante for the audience to really run with as our hero takes charge against the villains of the film. However, considering the low budget and efficient pacing of the film, it’s not a huge detriment to what Hard Target 2 accomplishes. The film moves at a remarkable pace, changing up the scenery within its jungle setting to impressive effect and keeping things action oriented and punchy. This approach only benefits the film as it hits a lot of predictable plot progressions and creates a loose and fun narrative that a viewer can sit down and simply enjoy. Hard Target 2 isn’t brain science, but it was never meant to be so take it as it is and enjoy it for its occasionally silly and entertaining ways.

The talent for a great, entertaining film is all here too. Director Roel Reine is infamous for his ability to make massively entertaining low budget films and he continues his streak of crowd pleasers with this one. In many ways, he was already a student of John Woo’s Action School for Cinema and he brings that to forefront with this film. There are even plenty of references to Woo’s style from the original including spinning arrow shots, split kicks, and even doves for that dramatic effect. Reine however excels in his ability to showcase action as it is happening and his refusal to edit unless necessary makes this film all the more entertaining to watch. Seeing Adkins front kick the badass Rhona Mitra through a wall in one take is always a delight and Reine knows as much and gives it to his action hungry audience. He’s not quite up there with the likes of Isaac Florentine in artistic action quality, but he’s getting there.

It helps Reine a lot when Scott Adkins is a bonafide B-movie star (that should have graduated to A-level success at this point, but I digress), and the film is littered with awesome, gimmicky baddies worthy of a beat down. This combination proves to be explosive. Adkins ably handles the lead duties with impressive screen presence and accomplishes the action with effective precision utilizing some strong fight choreography to give the film some exciting stuff. A special shout out has to be given to the villains of the film as its littered with outrageous and villainous characters that are ably portrayed by most of the secondary cast. Knepper goes for the same style of insane, but effective evil that Lance Hendrickson used in the original (I believe it’s somewhat indicated in the film that the two characters might be related and his performance makes sense in that way) and he’s surrounded by worthy henchmen – including the previously mentioned Rhona Mitra who doesn’t quite get enough screen time in my opinion. It’s also worth noting that the finale features some seriously awesome cameos from some of Thailand’s best and overlooked action stars – including the incredible Jeeja Yanin that wasn’t nearly long enough to satiate my Thai action addiction when they showed up. However, their appearance was simply icing on the cake.

Hard Target 2 is, more or less, a film still focused on delivering an entertaining experience to action fans more than anything else. So even if you are a fan of the original, but find yourself dismayed with the existence of this film, it still may not be for you. However, for those looking for a massively entertaining and well-rounded film that’s efficient and loaded with action – you can’t go wrong with what Hard Target 2 has to offer. It’s well executed and charming in its own low budget and earnest way. This may not be a film for everyone, but for this reviewer it’s easily going to make it onto my best action films of the year list.

Written By Matt Reifschneider
Posted by DarkReif at 7:10 AM