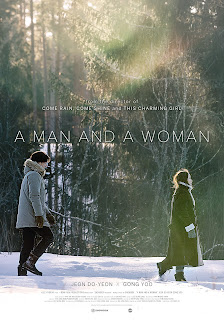 Lee Yoon-ki is one of those directors that not a lot of people know about, sadly, but he has always been one that I get excited for every time he has a new project in the pipeline. Given that two of my favorite performers from Korea, Jeon Do-yeon (Secret Sunshine) and Gong Yoo (Silenced) were attached as the two leads, admittedly I began to quickly over hype myself for said film. It came out finally on Blu-ray in Korea, and well, I left the film, equally satisfied and annoyed.

A Man and A Woman is the story of... uh... a man and a woman (yep) that meet by chance in a foreign country. The two people are very lonely and that is quite apparent by their nature in general. Both, coincidentally, are sending their children off to a trip with a schooling group. Afterwards, the woman is without a ride, and grows worried for her child, as he has special needs, so the man offers her a ride to go to the place where their children will be staying, to allow her to have a since of relief, and during their car ride there, the two seem to hit it off. Essentially, a romance occurs, which is in no way a spoiler at all, and it is quite obvious where things are going, so nothing more is needed on the plot.

This film is absolutely gorgeous to look at. All of the snowy winter in Finland (I believe that is where they are) is gorgeously captured in every frame, and the use of close-ups and interesting framing really showcase the intimacy that grows between these two isolated beings. Eventually the story shifts back to Korea, where they are from, and it is nice to look at, though the shift from the nature to the cold city, is quite jarring. Still, it is shot gorgeously all the way through and is without a doubt one of the highlights of the film.

On the other hand, one thing that made me happy, and annoyed me, was the score. It goes from being absolutely chill inducing to cringe inducing and visa versa over and over again. One second, the music moves you and sinks you further into this forbidden romance, and then it's as if the orchestra is just goofing off and bashing you over the head with their instruments, completely unaware that they are still recording the score and the director decided to just use what they had. So many cues that just felt so out of place that I often found myself laughing, and that is never a good thing, when unintentional.

My other problem is with how ridiculous these two people finding each other gets. I won't spoil, but considering the fact that they don't follow one another back and forth between Finland and South Korea, I kept being utterly taken aback that they continuously tracked one another down and it becomes increasingly absurd as the film carries on.


In the end, I enjoyed the film, but there are so many little problems scattered about that the film ends up being a delicious treat spoiled by the fact that someone decided to sprinkle (insert something considered universally disgusting here) all over the top. No one wants that, though I am sure there's that one guy (you know who you are). I think it is safe to recommend this film to fans of the director, but at the same time if you are just looking for a film to watch by the man just watch My Dear Enemy.