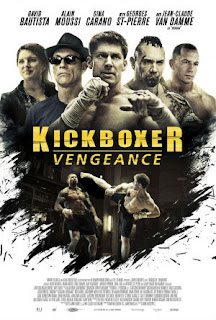 As the remake and reboot train keeps chugging along, it’s going to continually reap the benefits of nostalgia for a lot of properties. For those of us that love the originals, we can only hope that they honor and recreate the same heart while giving us something decently fresh while doing so. Such is the case with the latest nostalgia-trip-reimagined Kickboxer: Vengeance. Don’t let the fancy new subtitle fool you, this is not a sequel to overlooked action franchise of yesteryear. Vengeance is a remake of the original Jean-Claude Van Damme vehicle that set him on a road for stardom. In many ways, it’s one of those remakes that works because it understands why the original worked and retains that while bringing something different to the table at the same time. I’d be lying if I said that Kickboxer: Vengeance is a great film, at least in classical critiquing standards, but it’s also a film that inherently knows what it is and delivers on such promises. Perhaps it was my generally negative attitude going into the film, but Vengeance came out as something pleasantly surprising as a modern action flick.

Kurt Sloane (Moussi) was always the good kid compared to his hotheaded brother Eric (Shahlavi). When his brother goes to Thailand to face off against a Muay Thai champion Tong Po (Bautista), he walks into a ring to never walk out. Now Kurt wants vengeance for his brother, but to beat Tong Po at his own game he’s going to need to need a trainer (Van Damme) that understands and a live or die attitude that can’t be faked.

I’m not going to proclaim that the original Kickboxer is some kind of untouchable cinematic gem. It’s not. It’s a fun movie, one that has carried itself through the decades on its charm and delivery of its low budget thrills, but it’s hardly the seminal classic so many action fans praise it for being. In many ways, Kickboxer: Vengeance replicates the things that made the original one so effective though. It knows that it’s cheesy at times and that it’s not going to be a film that garners a lot of critical praise, so it doubles down on what it knows it can do well as a straight to home video actioner: action and a wink-wink can-do attitude. This is easily the key to the film being as enjoyable as it is. Even when the film is faltering, thanks to needless subplots that feature a stiff Georges St. Pierre or a romantic tryst that might even be more forced than what was in the original, it at least has the sense to make it fun and keep it tight. The speed of the narrative works in its favor as does the sense to keep the settings moving for its action scenes and that balances the sense of entertainment nicely while never becoming overbearingly dramatic.


Considering how critical I have been to director John Stockwell in the past (I still think In the Blood might be one of the worst directorial examples for a low budget actioner in this modern era), he holds his own here shockingly. Outside of occasionally over editing, in particular the opening fight sequence between Alain Moussi and Georges St. Pierre which had me on rolling my eyes as the film started, Vengeance goes for a slightly more old school approach for the rest of the film and it works. There is some humor to be found in a lot of the obvious nods to the original or low budget action in general (I thought the use of workers carrying panes of glass was delightful) and the film works with that to balance out the more intense dramatic beats of its story and action. When the film wants, it gets gritty and brutal in some solid modern ways and the finale between the imposing screen presence of Bautista as Tong Po – could there get a better casting choice for the villain in this version? The answer is no – and the every guy charm of Moussi is impressively vicious and effective.

Which does bring up the point, that perhaps the secret weapon of Kickboxer: Vengeance is how strong the casting is in the film. While the previously mentioned Bautista as Tong Po is perhaps one of the best (if not obvious) choices for the film, it’s the ace in the sleeve of Alain Moussi that seems to work best. Like Van Damme in the original, he has this ability to be both charmingly mainstream as an everyday man, but has an effective screen presence as an action star and fighter. His chemistry onscreen is impressive and he works with his secondary cast in a lot of amusing ways. Even when the film has weaker actors on hand (both Gina Carano and St. Pierre struggle a bit,) it uses them in ways that still benefits the whole. A special note has to be made for the casting as JCVD as the trainer for Kurt as something brilliant that the film did. In recent years, JCVD has proven to still be a screen force to be reckoned with and his scene stealing apathy and fun fight sequences in this one are key to keep the casting choice from seeming too much like a gimmick – even when he makes fun of Kurt for doing the splits.

All in all, it’s hard not to be pleasantly impressed with how Kickboxer: Vengeance approached its take on the original and balancing the serious and fun with the homage and the modern spin. This is definitely one of the big surprises of 2016 in its quality and it uses its own flaws as an advantage to prod its audience and it uses its inspired casting to glaze over the massive pitfalls it could have stumbled into. Sure, the film still isn’t perfect and it still may not appeal to cinephiles outside of the action junkies, but considering how so many reboots and remakes completely miss the mark I found Kickboxer: Vengeance to be a great way to burn an evening.

Truthfully, I am stoked that this is meant to be the first part of a trilogy. If the next two are as half as fun and entertaining as this one than this series will do just fine. Not to mention, I think Alain Moussi has a long career as an action star and Kickboxer: Vengeance is only the beginning.