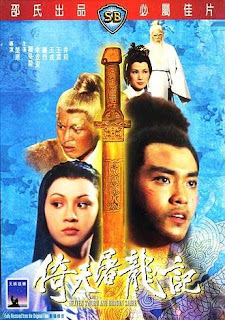 Going into Heaven Sword and Dragon Sabre, I’m not sure I knew what I was getting myself into. I’m a big fan of Chor Yuen as a director, I’m a fan of wuxia, and a fan of the Shaw Brothers, so I had a general expectation of what was going to happen in the film. However, I did not realize that going into this one that it would be one of Chor Yuen’s most epic wuxia films I’ve seen to date. So epic, in fact, that the first film ends on a ‘to be continued’ note and even goes as far as having teaser scenes and a narrator prod the audience about seeing the second installment. This is why I chose to actually review the first two Heaven Sword and Dragon Sabre films together as it’s obvious that the two films were meant to be one long three hour wuxia epic. In a way, the films are easily better when watched back to back and they certainly make a bit more sense as the films flow in a manner meant to be watched as such, but even then neither one is on the upper echelons of Shaw Brothers wuxia nor even some of the better films from Chor Yuen. They are fun and packed with entertaining characters, but they are far too dense and rushed (even at three hours) for their own good.

Chang Wu Ji (Derek Yee) has had a troubled life. He’s been raised by a plethora of various people, learning a bit of kung fu here or a bit of medicine there, but being struck by the blow of a Freezing Palm has left him with little time to live. So he sets out to find his real family. On the way, however, he stumbles onto a series of strange events that all seem to point to a conspiracy to eliminate the Ming Clan and he seems to be the key to unlocking it all.

The above synopsis for the film seems rather vague for a three hour wuxia story simply because, well, there is a lot of shit that goes on in the two Heaven Sword and Dragon Sabre films and I didn’t want to write a damn novel. So much plot, in fact, that I didn’t even mention the two mystical weapons that grace the title of each film. Even for a Chor Yuen wuxia film, there seems to be a lot of information for the audience to absorb at some rapid rates. Many of his films start off with a kind of ‘exposition vomit’ to set up the story that’s going to be told in the film, but the massive amount of set up required to get the audience caught up here is somewhat absurd. The first five or ten minutes comes off like a montage of a historical text as it sets up the foundational characters and plotting to establish the sword and the various clans/people that will be encountered as the film goes on. Most of it is not needed, at least not in this manner, as the film explains a lot of things as it goes including the two mystical weapons that don’t actually show up together on screen until the final duel, but it does start the film off on a notoriously epic foot which it continually runs with. As it goes though, Heaven Sword never really lets up until the second half of the second film from consistently adding new characters and new plot pieces which makes the film much too dense for its own good. Entire subplots are added that go nowhere (including an aside where there are foreign invaders that is dropped like a hot potato in the second film and they decide to add in an entire needless one featuring a Persian kung fu clan that exists only to needlessly complicate shit) and many of the more interesting stories and characters are glossed over. I was far more interested in the various super fighters of the Ming Clan than most any of the other plotting and yet they exist only to show up when the plotting needs them.

This epic and meandering multi-layered plotting certainly adds to the epic tone of everything as characters are seemingly added and negated at whim, but it also can detract from the overall narrative and character arcs of the main players. Poor Chang Wu Ji, played with charming effect by Derek Yee, seems – more or less – to wander around getting into horrible situations rather than accomplish some kind of quest. By the time the film ended, it was almost like he never did anything. He does a lot, like sporting a smoking man bun and going full Nightcrawler with teleporting powers (both of which are by accident), but his character arc never really goes anywhere. It just feels as though Heaven Sword is too unfocused and meandering in its storytelling to really strike the right emotions and drive the right situations home to be one of Chor Yuen’s better wuxia films.

Fortunately, there is one saving grace for the Heaven Sword and Dragon Sabre films. They might be too epic for their own good to resonate beyond the run time, but it sure is fun to watch them while they're on. This is because Chor Yuen knows that to be able to spew all of the names, places, and plot at his audience he is going to need to make it entertaining so they won’t fall asleep. Most of the characters are broad stroke caricatures featuring gimmicky features and bright colored clothing (my favorite is how The Green Bat actually has fuckin’ fangs) and he consistently puts them at odds with one another in silly games and fights sequences. Each of the two films features an extensive “tournament” sequence, plenty of traps, characters that shift from good to bad or vice versa, and extensive sword battling sequences. The second film has two very awesome sequences, one that features a burning building and one at the end where our heroes must face off against three ‘retired’ Shaolin monks hell bent on preventing them from sitting in their trees. Sometimes the film doesn’t make sense in its non-stop fight sequences – including plenty of random side quests for our hero to accomplish, but it does make for an entertaining film nonetheless.

If only the two Heaven Sword and Dragon Sabre films could have simplified and focused down their narratives and plotting, they could have been some of Chor Yuen’s best wuxia films. However, they do remain ones that slather the audience with plentiful acrobatic sword battles and a slew of colorful characters to keep them entertained as it dumps volumes and volumes of lore, character pop ups, and side stories onto the main tale of Chang and his quest to visit his family. It’s decently executed with plenty of great sets and fun performances to carry it through, but both entries suffer ultimately from overly complicated scripts and rushed pacing to get it all in. For wuxia fans, these two films are worth seeing, but for most others they might seem a bit too overzealous in their attempts at being ultra epic.